(Editor’s note: Dispatches receives no remuneration from the expat-friendly banks mentioned in this post. The post reflects the personal experiences and research of the author.)

Nowadays, having a bank account is as necessary as having a mobile phone. Hence, if you are thinking of moving to a different country, it is one of the first things you will need to set up. Even though having a bank account is a fundamental thing, some banking procedures are not always as easy as they should be. Opening an account can be a bit overwhelming, so here’s my advice about the friendliest banks to deal with for expats when trying to set up a bank account in Portugal.

I lived in Germany for some time when I came to Europe, so I got a German bank account. But after moving to Portugal, the company I got a job proposal from needed me to have a Portuguese bank account to pay me my salary. I first went to Santander because it was the one nearest the area where I was staying. By that time I just had a German tax identification number and address, and a job offer letter to work in Portugal.

I was feeling a bit lost and didn’t understand why everything was so complicated even for me as a Portuguese citizen. The fact is that without a Portuguese bank account, I couldn’t start working.

A few days later, I was passing by Amoreiras shopping mall, and I saw ActivoBank. I went in, explained my situation and they said that it wasn’t a problem. I could use my German tax identification number and address, and update my data later on when I was all settled. I showed them my documents and in less than 15 minutes I had a bank account and a debit card. It was as easy as that!

For my sister it was a bit different. She had a Portuguese address and a fiscal number, and although she had already signed her work contract and had a starting date the following week, bank executives said that that wasn’t enough. At that moment, she was enrolled in a Portuguese course, so she asked if they could open the account as a student, and so they did. Why am I telling you about this? Well, you need to bear in mind that even within a great bank there will always be people that go through different experiences.

So, I gathered this list following the advice from expats, my immigrants and expats friends and their previous banking experiences in Portugal.

Taking this into consideration, here’s my Top 3 of expat-friendly banks in Portugal:

No. 3 Millennium bcp: This is the second biggest private bank in Portugal, its history began in 1985, and nowadays it is present in Poland, Angola and Mozambique. This bank has maintenance fees and high fees for transactions in general, but their staff speaks English in most of their offices in Lisbon.

Millennium has several branches everywhere in Portugal! However, by the design of its website we could tell it isn’t the most digital-friendly bank, which is an essential feature for customers nowadays. I think they knew this was their weakness, and that’s why they decided to create ActivoBank, but you’ll learn more about this later on.

2. CTT Bank: This is a relatively new bank that belongs to CTT which operates the national post service in Portugal. I haven’t had any personal experience with it, but a lot of expats recommend it because it has no fees, and there are several of their offices around Lisbon. Their website is not in English, but I explored their app which seems to be alright to navigate. Setting up an account doesn’t involve unnecessary documentation, and they offer several types of accounts.

1. ActivoBank: This bank is recognized in the whole country by its digital solutions, you can do everything online! Furthermore, there are no maintenance fees, no card provision fees and their transaction fees are very affordable. However, the fact that you don’t pay for anything doesn’t impact the quality of their customer service. At least one person on their staff in each office speaks English fluently, and they have been extremely helpful and friendly to me and everyone I know that has an account there.

So, here’s the story: ActivoBank belongs to Millennium bcp and was created in 1994. I do think that Millennium knew what they were lacking and went for it, creating a bank in which you can even open an account online! Activobank’s app is super user-friendly and available in English, the same as their website.

I think that, overall, it definitely deserves the first place in this competition.

Mónica Da Silva was born in Venezuela but her parents and grandparents are Portuguese. She’s a teacher and translator. Mónica lived in Bonn, Germany for six months and has been in Lisbon for almost three years.

She speaks Spanish, Portuguese, English, French and a bit of German.

Read more about Lisbon and Portugal in our Dispatches archives 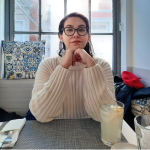