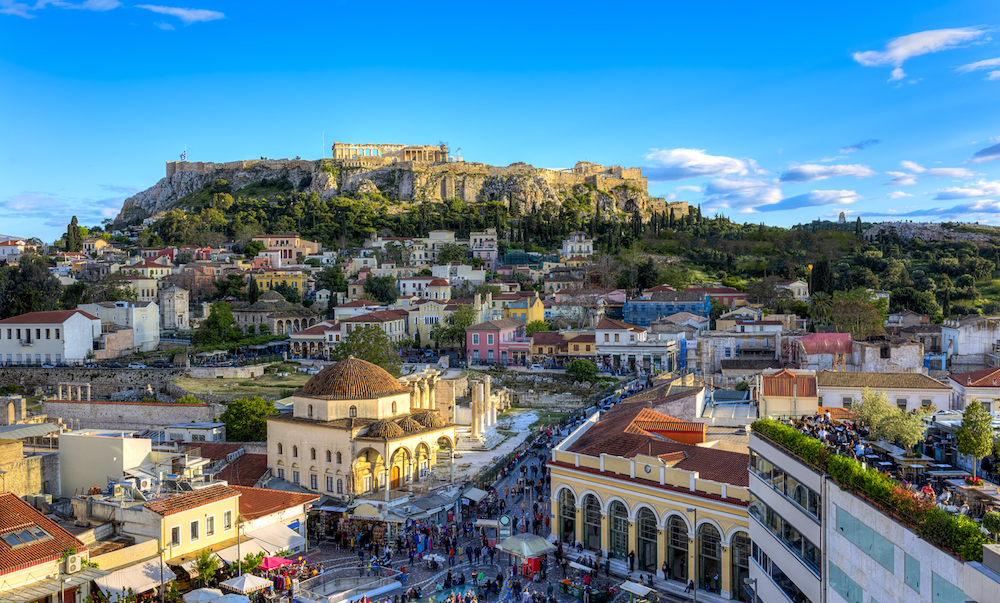 Athens just won the title of “the European Capital of Innovation,” awarded by the European Commission at this year’s Web Summit in Lisbon.

The Greek capital beat out an incredible list of cities including Aarhus, Denmark, Hamburg, Leuven, Belgium and Umeå. Sweden for the title, and for the 1 million euro prize. That Athens tops Aarhus is nothing less than remarkable consider Greece was the pariah of Europe back in 2008, on the verge of bankruptcy after the Great Recession.

EC Research, Science and Innovation Commissioner Carlos Moedasat acknowledged as much when announcing the selection:

Athens stands out as an example that a city facing many challenges can achieve great things. Through innovation, Athens has found new purpose to turn around the economic and social crisis. It is proof that it’s not the difficulties but how you raise yourself above them that matters.

With the award, and with her native United Kingdom on the verge of Brexit, we asked Dispatches contributor and British expat Lynne Evans to follow up with her insights into daily life in her city, which has about 3.8 million inhabitants in the metropolitan area.

Although there aren’t typical Athenians – they are a mixed lot – the one thing they have in common is a love of coffee – Greek coffee. The Athenian day usually begins with one (or perhaps two) and once this fuel has been washed down with a cigarette or two (yes, Greeks still smoke rather a lot, although some have managed to kick the habit now) they venture out.

They may or may not drive to work, depending on:

• how near they live to a metro station or bus stop

• the proximity of their place of work to their homes.

Why does the vehicle’s registration number matter, I hear you ask? The answer is very simple: Central Athens is always congested, with vehicles belching out fumes.

In an attempt to make the air cleaner, vehicles with number plates ending in an odd number are allowed in the city centre on odd dates of the month, and those with even numbers at the end are allowed to travel in downtown Athens on even dates. Vehicle owners seem to obey this law, more or less, which has always surprised me. I asked a Greek friend of mine about this unusual adherence to a law, and he said that most Athenians had two vehicles, one with an odd-numbered registration plate, and the second with an even-numbered one. 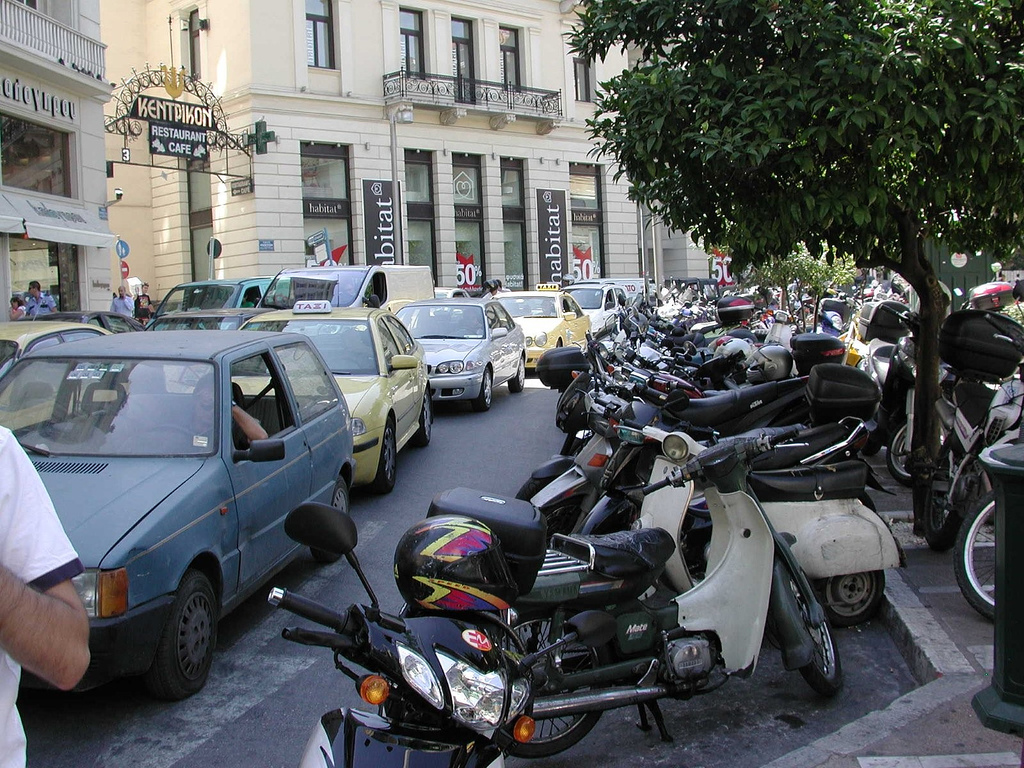 No parking spaces in car parks? No problem!

If a Greek can’t find a convenient parking spot close to where he (I use the male personal pronoun deliberately – women are more considerate generally) wants to be, he’ll double park. Soon others will follow suit and traffic mayhem ensues. Hoots, honks and much colourful swearing will be heard. (Greeks don’t recognise the phenomenon that is noise pollution.)

Eventually, a police traffic person may stop drinking his or her coffee long enough to investigate the cause of the noise, and vehicles will have their registration plates removed, and/or the vehicles will be clamped: not towed away, please note!

It’s much easier to take a taxi from home to the nearest metro station and then after the metro, to work. This is how most working Greeks get around. Of course, the metro, buses and trams are crowded, and tempers frequently become frayed, although I’ve never seen Greeks actually hit each other. There’s a lot of yelling and posturing, but rarely any blows.

So begins a typical working day in Athens. What next?

Finally, Athenians are safely ensconced in their places of work and the coffee machine is working. The mayhem is postponed until everyone surges onto the streets again at the end of the working day and the morning chaos is repeated.

Lunch on the hoof, or not 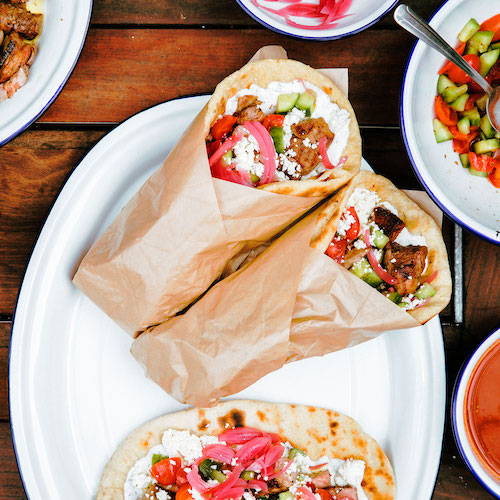 There is the lunch break to contend with, although most workers walk to a nearby place for lunch rather than risk losing their car-parking space.

Most Greeks head for the nearest, or their favourite, souvlaki shop (σουβλατζίδικο) for lunch. You can get kebabs, as well as pork, chicken and sometimes even beef souvlaki in these places. Gyros, or döner kebabs are also sold usually.

These places are really very cheap, and you can eat well. All kebabs come with salad vegetables and perhaps plain yogurt, in the case of döner kebabs, or tzatziki (yogurt with garlic and cucumber). Kαλαμακι are also available; these are small pieces of (usually) pork threaded onto a thin wooden skewer, small souvlaki really.

There are also small, cheap tavernas well off-the-beaten-tourist-path that are difficult to find if you aren’t with a Greek who is acquainted with such establishments. Tourists might have a language problem if they venture inside one of these places, as English will not be spoken much. However, it’s always fun to try to communicate using sign language. Other customers will appreciate a good laugh! 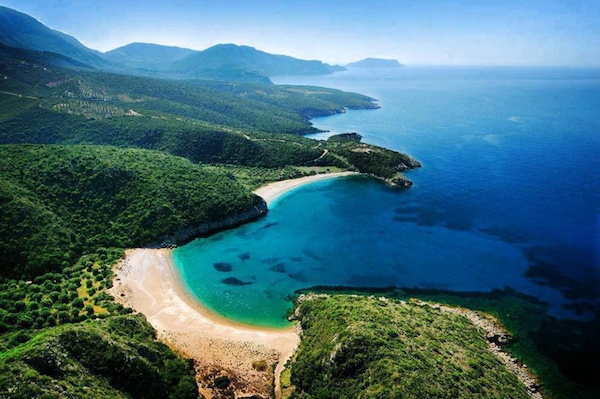 Rush hour begins again between 5 p.m. and 8 pm, as people finish work at different times. They display lemming-like behaviour as they jump into their cars or onto a tram, bus or into a taxi. Where are they all going?

To the beach of course!

Even in winter, some diehards head for the beach. If it is really cold they won’t swim but will sit in a café as near to the sea as possible. Some winter days are warm, and swimming is possible although the sea temperature is much lower than in the summer months. However, British tourists and others from colder climes don’t mind and swim anyway. Greeks play ‘Spot the tourist’ and bet on where they are from.

Some will go to Lake Vouliagmenis rather than the beaches, which are very crowded in summer.

Depending on the time of year, the next part of the day is lounging in a café with the ubiquitous coffee. Greeks spend quite a lot of time in cafés of one kind or another. Only tourists use American coffee chains on the whole. There are excellent Greek chains such as Γρηγόρης (Gregory’s) where the coffee is excellent. The food isn’t up to much, but you can’t beat the coffee.

There are many tavernas and restaurants to choose from in Athens. Greeks are creatures of habit and often go to the same tavern every night. But what do you do if you are a tourist?

Taxi drivers are a goldmine of useful information and can usually recommend a good place to eat.

That said, you have to be a little wary as they may take commission from more up-market establishments, which means that you are paying over the odds for your meal. It’s a problem tourists come across quite often in Athens.

If you do go into a taverna recommended by a taxi driver, pay attention to what he does before leaving. If he engages the boss or a waiter in conversation, he is mentioning commission. Also watch for sign language when he eventually departs. Remember that you can always leave and find another taverna.

Look for places that Greeks frequent. These will be fairly cheap, and the food will be traditional. It has to be said that Plaka, the famous picturesque neighborhood near the Acroplis, is an excellent place for cheap traditional Greek food, as there are so many restaurants competing with each other for custom.

My favourite taverna is Taverna Plaka on Kidathenaion (meaning ‘pride of Athens) Street. It’s run by two brothers, Nikos and Artemis. At weekends, there is live music (Greek) and no one minds if you dance, either in the taverna or on the street, if the taverna is busy. I’ve been going there since 1985 and although chefs have changed, I’ve never had a bad meal there.

A word of advice

Central Athens is often closed to traffic because of a visiting dignitary This can be extremely annoying, and if you are in a taxi the fare will be much more than it usually is because of traffic jams. Before you leave your accommodation, go online and find out what’s happening. The daily newspaper, Ekathimerini (meaning ‘every day’) has an English edition and it has all transport updates.

If you need to get to the centre, check that Syntagma (Constitution) Square is open.

Whether Athens is the “capital of innovation” in Europe is debateable. But Athens is a vibrant city with lots happening everywhere whether you’re a visitor or an expat resident.