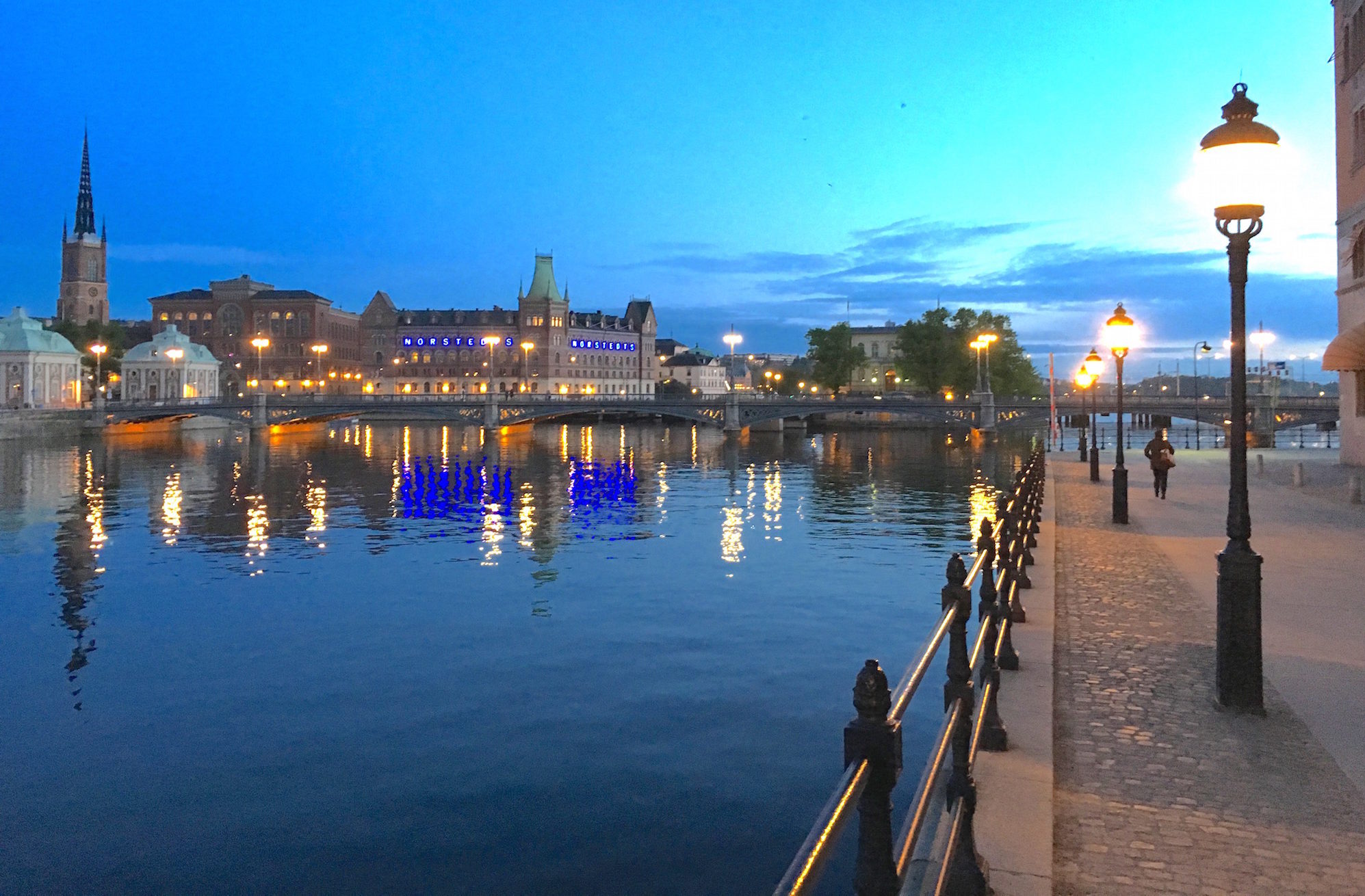 (Editor’s note: All images and video are by Terry Boyd and Ivana Avramovic, and were taken with an Apple iPhone 6s Plus with 4k video.)

Traveling to a great European city – if everything goes your way – is like starting a new love affair.

The question isn’t whether you’ll embrace the city. The question is, “Will the city embrace you?” Will it seduce you and show you everything you fantasized about? And I have to say, Stockholm seduced me on the first wild night we spent together. 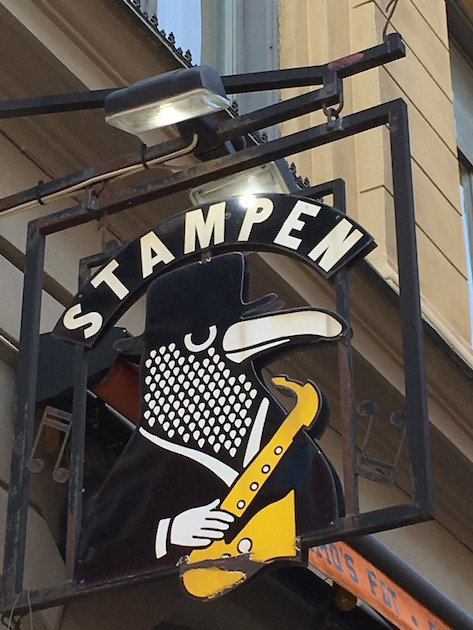 We’re at Stampen, one of the legendary music venues in the Old Town, on a raucous Friday night in May, and this giant Swedish guy has me in  a bear hug, insisting I take his stool at the bar. Another guy is trying to convince fellow Dispatches contributor Ivana Avramovic and me that he’s brought both his wife and his girlfriend with him. I’m totally diggin’ it. Ivana is skeptical.

“The ‘girlfriend’ said several times to the guy, ‘You wish,’ and to us said, ‘No, I’m not his girlfriend,’ ” Ivana said “But they both had great senses of humor …  they did that with a smile.

On stage, the Green Line Travelers are playing Buck Owens, “Little Liza Jane” and the Texas swing and Bakersfield Sound I grew up listening to in Kentucky. And then they play their own song, “Walk of Fame.” All I can think is, these guys will kill it someday at the Grand Ole Opry in Nashville if only because of their matching Nudie suits. And did I mention that oh my God, they’re good?

I’ve had more beer than I should have (two usually does it), and I’m blown away by fiddle player Agnes Odén. Somewhere along the line, I’m chatting up a beautiful Swedish woman half my age. (There really is no fool like an old fool.) 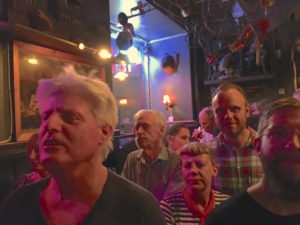 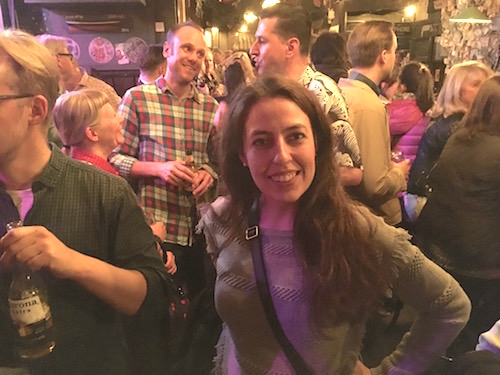 Ivana in the crowd at Stampen

At that moment, sometime around midnight, I know Stockholm loves me. And I sure as hell love Stockholm.

I wake up the next morning at the Stallmästaregården, a subtly luxurious boutique hotel, and say to myself, “Self, it’s all downhill from here.” But you know what? It only got better.

Stallmästaregården (the stall master’s garden, the stall master being the guy who took care of the king’s horses) overlooks the Bay of Brunnsviken in the Royal Haga Park, one of Stockholm’s largest and most regal royal parks. Regal in that it was founded by King Gustav III in the 18th century, and members of the Swedish royal family still live at Haga Palace. 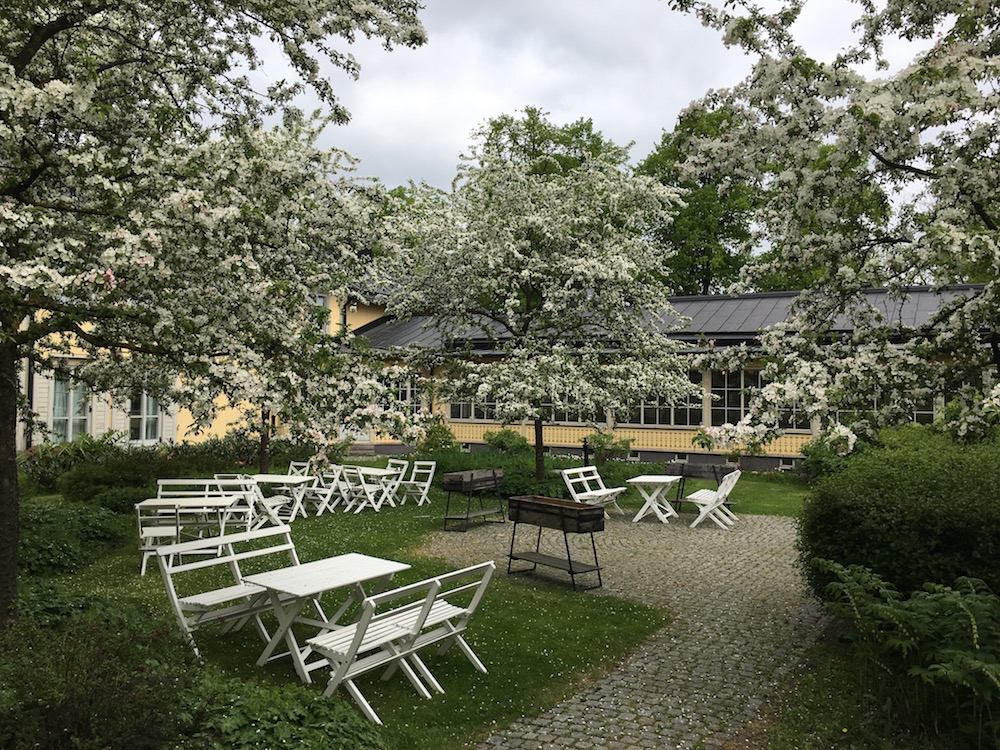 The garden dining area at the Stallmästaregården.

These days, the horses are gone, but the marinas are lined with pleasure craft as far as the eye can see. Haga Park is green with all sorts of running and biking paths, so you feel like you’re in the country. And you sort of are. Yet you can walk from the grounds of Stallmästaregården to Stockholm Central Station in the busiest section of the city in maybe 15 minutes (More details about Stallmästaregården in the hotel section.)

At breakfast, we meet up with an American couple we’d met the night before. Bill, a doc, was from Alaska. His wife was a California Girl. The couple next to us at the table was in town from Malmo on the border with Denmark and they joined us. For more than an hour we nosh and kibbitz … wide-ranging conversations about topics from Bill’s work with indigenous people in Alaska to the state of Swedish trains.

The four-day trip just kept going like that. We met expats and locals. An American woman who has created a historic pub tour in Stockholm. Young guys fixing bikes for free on the street near the Old Town. A couple picnicking at Skeppsholmen who invited us to share their beer.

Waiters and maitre d’s and random people on the street. Ryan, the definitive American expat working at a pop-up bar. The waiter who joined us for a chat during lunch at Pelikan, an authentic neighborhood restaurant you have to try. And that’s what saved Stockholm from being just another museums-and-mementos trip. That and the incredible amount of stuff to do and see. And though neither Ivana nor I – a couple of jaded expats who’ve worked together on and off since 2000 – typically indulge in stereotypical tourist stuff, we did this time, with a boat tour. Stockholm made a cliche into something memorable.

I have to admit the harbor cruises are great not just for sightseeing, but getting to know this complex city, which is spread out over an entire archipelago. Though it very much depends, as we found out, on the time of year as to what you can see. We wanted to take the Purple Historic Canal Tour around Kungsholman and two other islands, but it wasn’t offered in May. So we went on the Green Tour, aka the Royal Canal tour, which cruises past the ritzy Strandvägen district, through a narrow canal past the Royal Djurogarten, the world’s first ecological garden. (We also could have taken ferries to specific spots.) 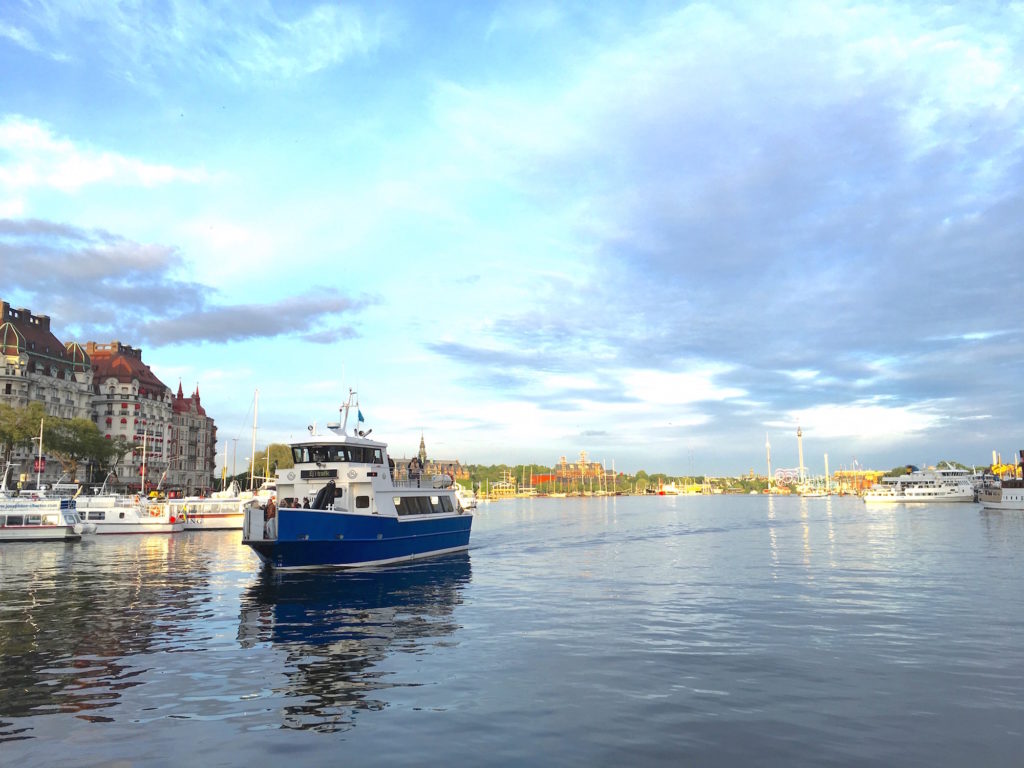 The only way to see Stockholm … by boat.

You can get boat tour tickets – about $35  per person – at several Stromma kiosks along the bayfront at Norrbro Bridge that connects the rest of Stockholm to Gamla Stan, where many of the major museums and palaces are located.

I actually took notes during our tour. Did you know that Sweden’s royal family isn’t Swedish at all, but descended from a French general left behind by Napoleon? Or that Stockholm was founded in 1252?

Okay, genug with the tourist stuff. Let’s get back to adventure.

Ivana’s concept for Stockholm trip (I was just tagging along) was that we would write not just about our adventures, but include actionable intelligence about hotels and how the unmatched Swedish transportation matrix works. So, she chose four hotels in four different categories – upscale boutique hotel, corporate hotel, groovy new design hotel and finally, ah, well … a budget hotel/student hostel. (Which I skipped out on, thank God.)

The first, the Stallmästaregården, is very old and pretty much the textbook example of sophisticated Swedish taste and design. Quietly inviting, dark wood interiors, five or 10 dining nooks and a hushed aire of Scandinavian reserve. The grounds of the hotel are actually a giant park. The restaurant has a Michelin star. It was incredibly hard to leave.

Not only did we collect notes for an in-depth hotel post, hotel-hopping forced us to see an incredible amount of Stockholm. Ivana’s philosophy: There’s only one way to see a city, and that’s on foot. From early in the morning to late at night. On the second day, a Saturday, we logged more than 28,000 steps, or about 14 miles, according to Ivana’s activity tracker. I didn’t even think that was possible …. 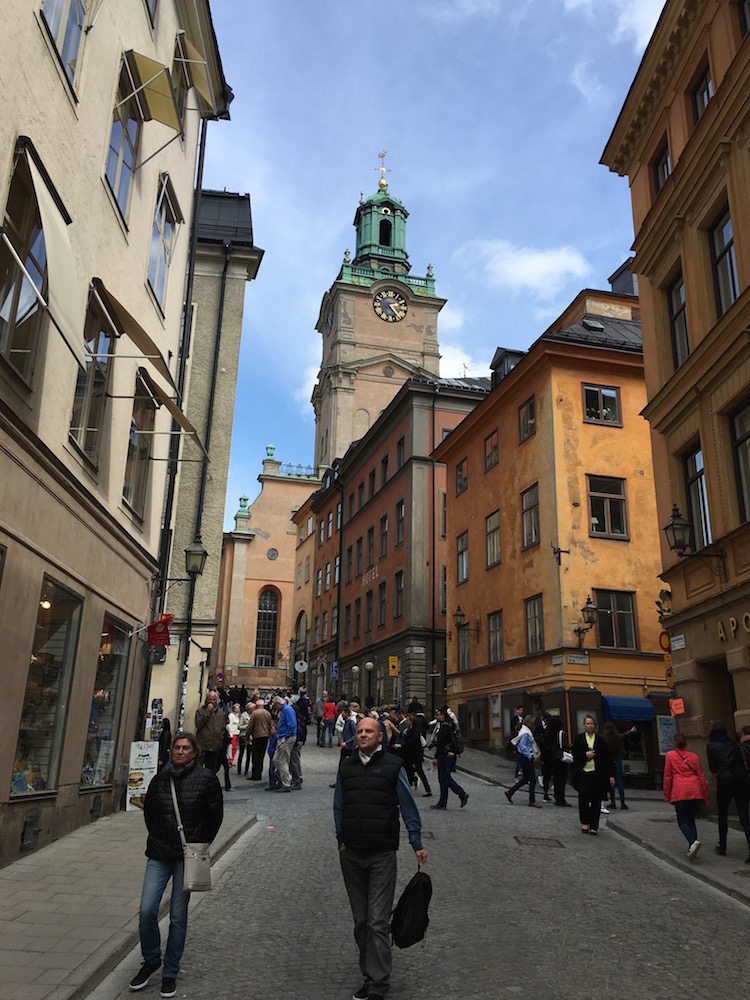 Stockholm’s Old City is overrun with tourists … but it doesn’t matter. The city is so large you just move on to the next cool thing.

But what a day. After breakfast and changing hotels to the Radisson Blue in the center of the city, we headed back to the Old City where we’d been the night before. You realize when you get to streets like Stora Nygatan in the Gamla Stan area that this is – on some level – a tourist town just as overrun as Amsterdam. But unlike Amsterdam, Stockholm is so physically big and spread out that maybe 1 percent of the city is congested. The rest is Swedes doing what Swedes do. Which mostly consists of reveling in the highest standard of living in the world.

Case in point: My favorite stretch of Stockholm is Strandvägen. This residential area was designed to look like Paris, with 20-room apartments. It’s the most expensive district on the water out to Nobel Park on the east. (Name a Swedish celeb, and they live in Strandvägen – from Abba members to Bjorn Borg.)

Strandvägen’s waterfront has party boat after party boat, cafe after cafe. Which is where we encountered a boat load of 20-something guys lounging in a hot tub. The next thing we know, they’re running to the back of the cabin cruiser and diving into the bay. And at least one is buck naked, much to Ivana’s amusement.

We never quite found our spot there because this is where the locals go. We spotted an inviting floating restaurant, but a wedding party had all the space. So we drifted back into town, taking photos and people watching. (Apropos of nothing, Stockholm has more exotic cars than any city other than Geneva. The McLarens, Ferraris, Rolls and Lambos cruising by got kind of monotonous.)

The Grand Hôtel – one of the most exclusive in Stockholm – sits on the waterfront, beckoning in the early evening. We go in, and the bar is full. Ivana being Ivana, she tells the maitre d’ she would very much like a table, please, and it would great if that could happen right now. The maitre d’, looking at our dress up clothes, tells us he has a table by the piano. (Expat tip: Always wear nice clothes  – blazers or suits – wherever you go. You get in places you otherwise won’t get in, along with a little R-E-S-P-E-C-T.)

BUT, our table has been reserved by a VIP for the last several days, a VIP who hasn’t shown so far. I’m thinkin’ Russian oligarch and his retinue of twiggy models. Later, we sussed out he gave us Johnny Depp’s table. Depp was staying at the Grand playing with his band, the Hollywood Vampires, while hiding out from soon-to-be ex, Amber Heard.

Johnny never showed, but we sipped bourbon, listened to the music amid the splendor, taking everything in. 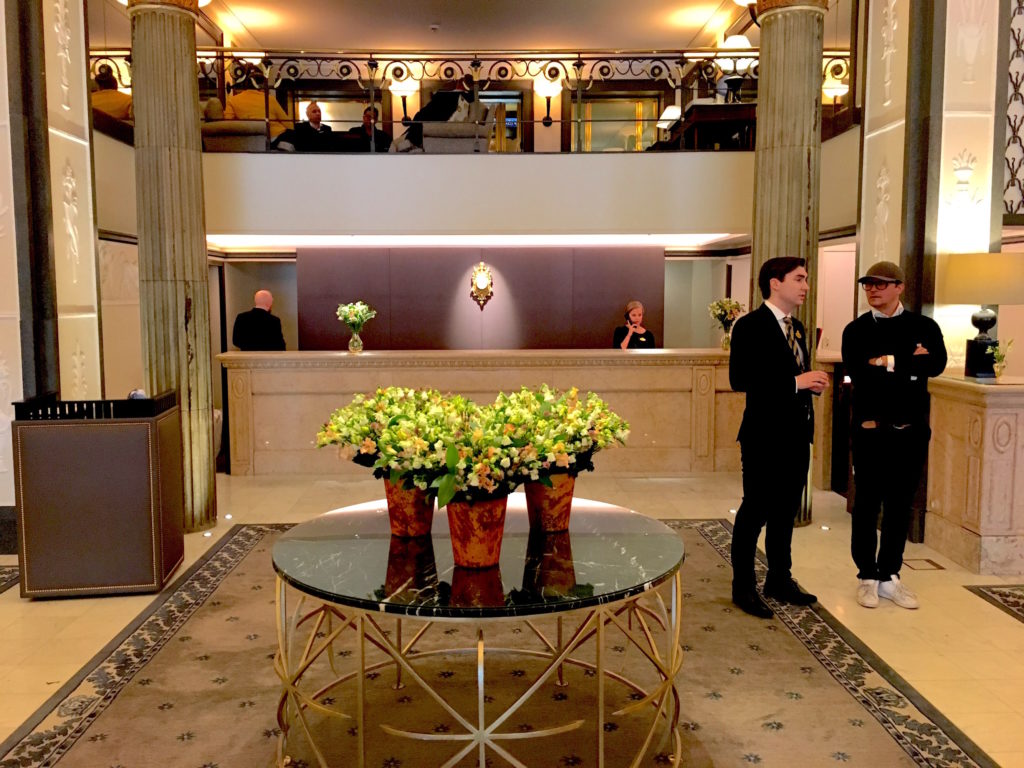 The lobby of the posh Grand Hotel is like Tiffany’s … nothing very bad could ever happen to you here.

Here’s the funny thing: I didn’t even want to go to Stockholm. Ivana goes all the time and comes up with this multi-phase travel story concept. So I call my wife Cheryl, and say, “I dunno … Stockholm …. The weather is terrible and the people are cold. I’m just gonna’ stay in Eindhoven and catch up on work.” She says, “Go, you big baby … you need to get out of town ….”

After the big adventure, and I’m back in the Netherlands, I’m telling the crew at Street Food, my favorite coffee shop, “Just got back from Stockholm and it’s awesome!” One girl looks at me like I’m crazy and says, “Stockholm. I dunno … the weather is terrible, and the people are cold.”

Where does that even come from?

Sweden has repeatedly been named “friendliest nation in the freakin’ world.” This is the country that came up with the concept of calling a random Swede, then added “A Slice of Swedish Hospitality,” where tourists are “adopted” by a local host, who feed and entertain them for an evening. And for the record, the May weather was perfect.

Sweden is like every temporal temptation distilled into one fairytale city. Beautiful people. Beautiful architecture. Beautiful setting. The only reason I wouldn’t want to live here (providing I was a billionaire) is that I would never get anything done. I’d be at Stampen every night drinking beer and trying to figure out whether that guy really does bring his wife and his girlfriend. Or at the bar at The Grand with Johnny Depp.

The truth is, Sweden has ruined me. I’ve fallen hard for cities across Europe, from Berlin to Istanbul … and then the rest. But what are the chances I ever find another city that thrills me – that takes my breath away –  like Stockholm?