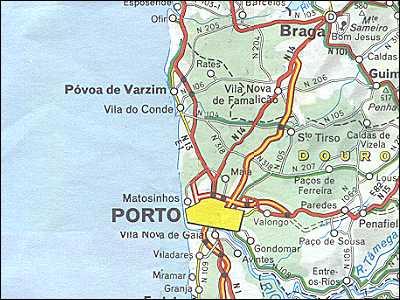 Porto, or Oporto, is one of my favourite cities. On the banks of the River Douro, it is the gateway to the Douro Valley and the wine producing region of the Alto Douro.

The city is Portugal’s second largest after Lisbon. It’s a bustling city with a lively night life and a laid-back atmosphere.

No trip to Porto would be complete without a stroll along the banks of the Douro River, on either side, although I prefer Cais da Ribeira on the Porto side. The opposite side is Vila Nova de Gaia, technically another city, home to the port lodges of the companies such as Sandeman and Graham’s that make Portugals famous fortified wine.

Stay in in the center city, close to everything

When I visit Porto, I always stay in a hotel more or less in the centre of downtown. 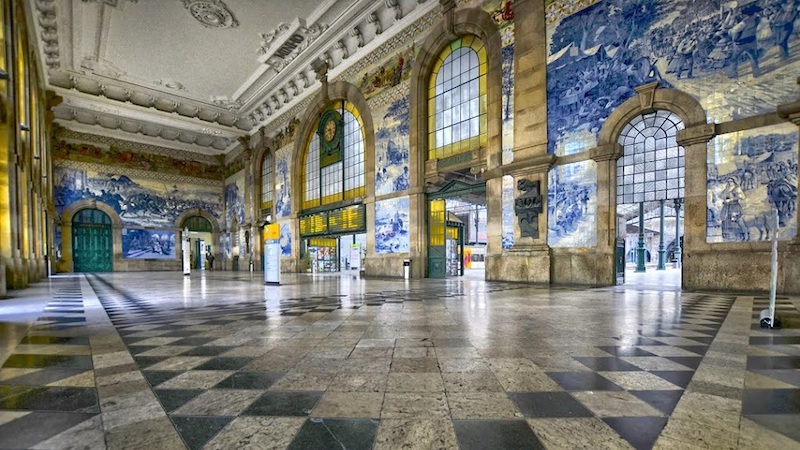 • You can walk to São Bento railway station in about 5 minutes, but don’t wait until you are travelling north out of Porto to visit it. Walk down the Avenida dos Aliados, but take a left before the river Douro to Praça Almeida Garrett.

This takes you to the railway station.

São Bento is arguably the most beautiful station in the world. It was built in 1900 and takes its name from a Benedictine monastery which was on the site in the 16th century. (The monastery was razed to the ground in a fire in 1783.)

It is well worth taking a long look at the blue and white tiles in the entrance/exit hall. The tiles show the history of transport in Portugal and of Portugal itself.

There are 20,000 azulejo tin-glazed ceramic tiles in the lobby for you to marvel at, which is why you shouldn’t simply dash through this area of the station. Take your time and see the work of Jorge Colaço.

• If you decide not to go down to the Douro and are ready to eat, wander down the side streets on the right as you walk back to the cathedral. There are quite a few traditional eateries, tascas, or taverns there.

Be prepared to sit on long benches and rub shoulders quite literally with the locals. They are very friendly and will try to engage you in conversation. Try the traditional dish of bacalhau (salt cod, above) and garlic sauce, or perhaps squid cooked in its own ink. The squid is excellent cooked like this, although it does look as though there’s an oil slick on the plate.

• Wash down your meal with wine from the Alto Douro. This region has been producing wine for more than 2,000 years, so it’s not surprising that it has found its way onto the UNESCO World Heritage list. From Porto, you can, of course, explore this region on a cruise up the Douro.

The locals can teach you a thing or two about history, and are very interesting to listen to. For example, I learned the Welsh are old allies of the Portuguese. I have not been able to verify the story, but, nevertheless, it’s worth relating.

Apparently, the English sacked Porto’s wine lodges and were attempting to get away with their booty, but Welsh sailors (presumably pirates, or should they be called buccaneers?) sank the English fleet as they sailed out of the river and into the sea. This story circulates all around Porto, so be prepared to hear it told often (if you’re Welsh, that is).

As you wander around the squares in Porto, you may find small groups of elderly men standing under trees and occasionally reaching up to pull a curious fruit from the branches. Although I tried it, I have no idea what it is. It has a large seed in its centre and is black/purple. You may find these trees close to stalls selling aguardente, the local firewater. Whether or not you should drink this hooch is a moot point. Forewarned is forearmed, of course. 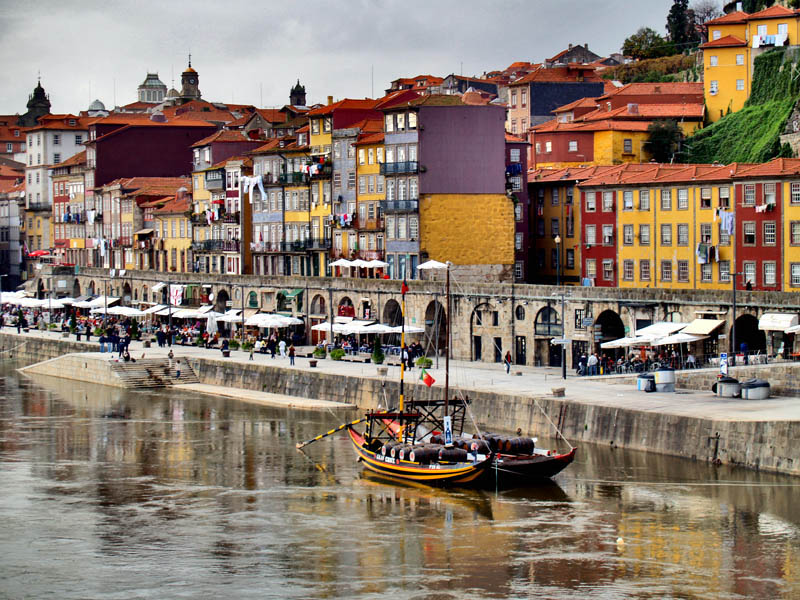 • Eventually you will find yourself in Cais da Ribeira, where you can take the weight off your feet and have a coffee, or something stronger. On your way there, you might find a tempting cake shop.

Try Portuguese gateaux, which are absolutely delicious. The ices are very good too at the cafes on the waterfront. You can sit and watch the traditional brightly-painted boats plying their trade on the water. Take one, if you are in the mood and go across the river to Vila Nova de Gaia.

• If you decide to go to Vila Nova on another day, do a left and wander around the dock area. You’ll see the seedier side of Porto, but there are some good, small eateries. They sell fresh fish, usually sardines, and in this area, I found the best octopus I have ever eaten. 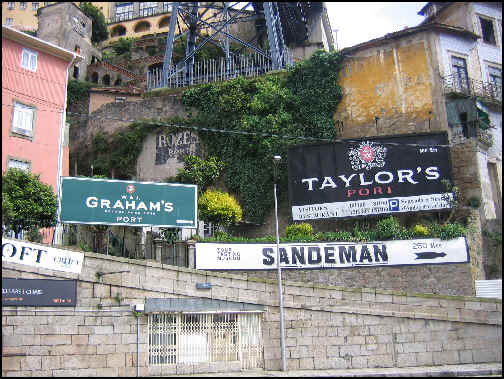 It’s interesting to view the locals here and imagine what they do for a living. It’s probably not always above board. If you escape with your wallet, go back up to Porto a different way.

Do a right along the banks of the Douro and hopefully, as you toil up the hill you’ll see the boatmen’s wives doing their washing communally in troughs in the street. The brightly-coloured clothes look very pretty when they are hanging up to dry. They add a splash of colour to the otherwise drab streets.

• Before you leave Porto, you really must visit a port lodge or two in Vila Nova de Gaia. You can sample port, white, red and tawny and decide which you want to take home with you. These ports are irresistible. Of course, you can always arrange with the port lodges to have your port shipped to you.

Not many people can resist at least one shopping trip when in a city. Oporto has a wide variety of shops and shopping malls on both sides of the river Douro. You are sure to find something irresistible.

There are many ways to cross the Douro, including walking, or riding (in a vehicle) across the Luiz I Bridge. The whole of the historic centre of Porto is a UNESCO World Heritage Site, so there is plenty for the history buff to see. You never know what is waiting for you around the corner.

To find out more about the city’s history, click on the link here. It will take you to the UNESCO site. 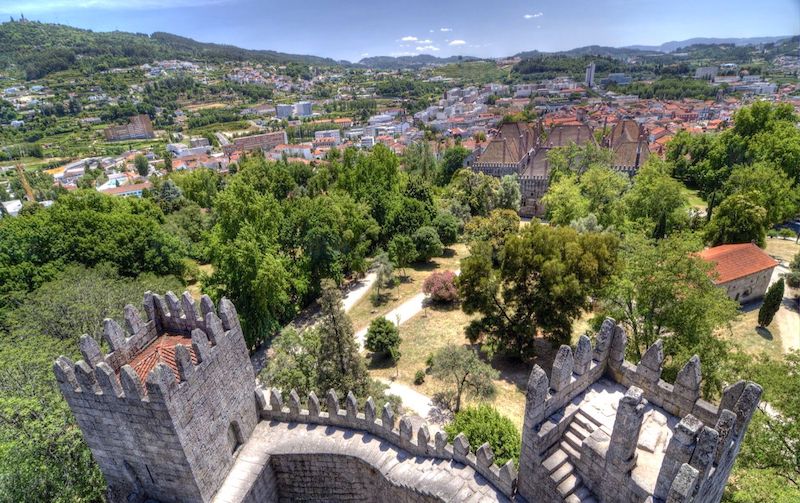 If you decide to leave Porto, after a few days (why would you want to leave this wonderful city?), consider going north to historic Braga, the third largest city in Portugal. The old city is full of cobbled streets which are closed to vehicles, another reason for visiting the city.

Guimarães is close to Braga, with its historic centre also listed as a UNESCO World Heritage site.

If you prefer beaches to historical sites, you might want to go to Viana do Castelo. This combines beaches with history. Northern Portugal has a lot to offer.

Remember: The Algarve isn’t representative of the country as a whole. Go to Portugal on holiday and explore its northern regions.

For more on the Portugal, check out Jack Harding’s post on Tavira here.

Lynne has visited many countries in Europe ad South Asia. Working as a freelance writer gives her opportunities to travel.