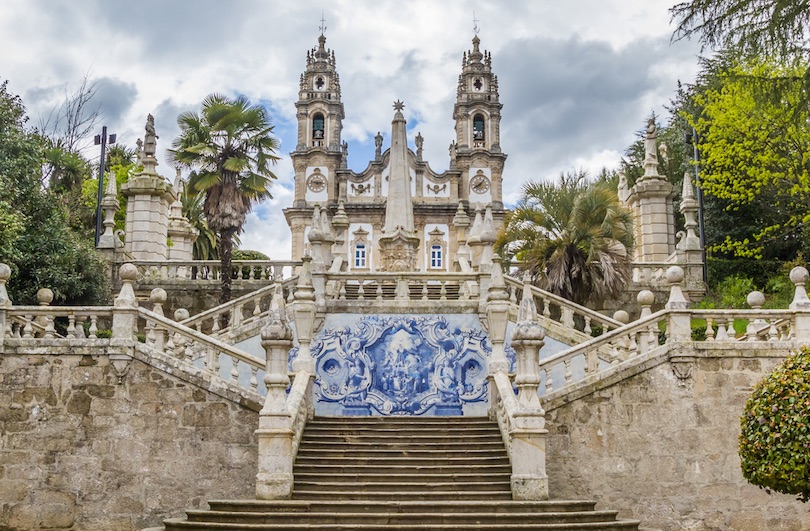 Most foreign tourists visit Portugal to go to the Algarve’s beaches, or to visit the wine lodges in Vila Nova de Gaia, on the opposite side of the river Douro to Porto. However, there is much more to see and enjoy, and northern Portugal is a delight.

I was lucky to live just north of Oporto, in a small town that was a centre for shoe manufacturing. It wasn’t an inspiring place to live, so every weekend I would escape either to Porto or Northern Portugal.

The Minho region is home to some of Portugal’s best wines. This is where the Douro Valley is located, world famous because of its wine and port. It is also a UNESCO World Heritage site. If you have time, you can enjoy a cruise along the Douro and see the gorgeous countryside.

One good thing about the Minho, for me at least is that it isn’t overrun by tourists. They all seem to go no farther north than Porto. That’s a pity as there are so many beautiful places to visit.

One of these is Viana do Castelo. It was from here that explorers left Europe to discover the Americas and the unknown world.

• The town is situated at the mouth of the river Lima and beach lovers will be pleased to learn that there are several beaches near the town, with the most popular being Praia do Cabedelo. There you can do water sports, as you can if you visit Praia de Afife.

•There are other beaches in the area too, Praia da Arda, Praia do Canto Marinho and last but by no means least, Amorosa Beach.

Go to Viana by train and when you alight, cross the road and catch the funicular to the top of the hill for some spectacular views of the town and its surroundings. Take this opportunity to visit the Basilica of Santa Luzia.

I have found that it’s best to do this before you explore the town as I tend to be beguiled by the delights it has to offer, so would never have taken the funicular – the longest in Portugal – if I had decided to go on it after exploring the town. The view from the top of the basilica is breathtaking.

Viana is a lively fishing town, and one of the reasons I visited it so often is the wonderfully fresh fish and seafood that is on the menu in so many restaurants. I once watched two lobsters struggling with each other in a tank in a small restaurant. Their front pincers had been tied together. but one lobster managed to partially free itself and attacked the other. I tried to alert the waiter, but he misunderstood, and I ended up with the feisty lobster cooked and on my plate. (It’s a good thing I like lobster!)

One of the Portuguese explorers of the 16th century, João Alvares Fagundes, was born in the town and it was he who discovered the cod fishery of the North Atlantic. He took salt cod (bacalhau) to Portugal and this is now the national dish. You must try it! Pescada a Vianesse is a traditional dish of Viana, made with salt cod, lemon, garlic, and served with sliced potatoes baked with onion slices. Wash this down with Vinho Verde, a slightly sparkling young white wine which is also produced here.

Caldo Verde soup comes from the Minho and this green soup is made with potatoes and kale. Another traditional dish that you should try. It usually has sausage slices in it too.

You won’t want to leave this town with its beautiful main square, the Praça da Republica, with its various architectural styles. These include: Renaissance, Baroque, Manueline and Romanesque architecture. The imposing cathedral in the square is a mixture of Romanesque and Gothic styles.

It’s an ideal place to have a coffee, ice cream or a fortifying drink.

When you manage to tear yourself away from Viana, head for Braga. You can go by train or bus. It’s one of Portugal’s oldest cities and has a distinctly religious atmosphere. The Braga diocese is the oldest in the country. Certainly, its cathedral. built in the 12th century, is Portugal’s oldest. It has been a centre of pilgrimage for centuries.

Braga was the home of the royal court between 1093 and 1147. The city’s most important religious building is the Sanctuary of Bom Jesus do Monte. Mount Sameiro, behind the sanctuary has a huge statue of the Virgin Mary on top of it.

You can’t get away from the sound of bells in Braga! There are so many religious buildings there. Even in the squares there’re no escaping them. There are three main ones in Braga, Largo São João do Souto, Largo de Santa Cruz, and the Praça Conde de Agrolongo. You can take the weight off your feet and relax or go shopping in one of the stores that line the squares.

Guimarães has some very old, well-preserved buildings, as it was once home to the powerful Dukes of Braganza. Their restored palace is one of the must-see sites in the town. Another is the 13th-century São Miguel do Castelo Church.  There is also the impressive Guimarães castle which allows visitors to get some spectacular views from its walls.

The historic town centre is a UNESCO World Heritage Site, which gives you an idea of how impressive it is.

The two most famous squares in the town are those of the Praça de Santiago and Largo da Oliveira, which for me, is the best.

Don’t be tempted to try and see the sights of Braga and Guimarães in the same day. You would miss such a lot. Stay at one of the many hotels in either town before returning to Porto, Lisbon or the Algarve.

You won’t regret visiting northern Portugal, especially of you stock up on Vinho Verde!

Trains in Portugal run to timetables and are very reliable! From the train windows you can see electricity pylons with platforms near their tops. These are used by storks to build their nests on. I’m not sure that these platforms were built for storks or not. They might have been, as the Portuguese love their storks, which are supposed to bring good luck (not babies!).

The trains run so that it’s easy to get a connection. In fact, a train will wait for passengers to alight from a train coming on the opposite track. All passengers have to do is walk across the small platform that separates the two trains. There’s no stress about missing a connection.

By the way, there was a train to Oporto from Trofa, where I lived, and while on the train I saw my first ostrich farm. When I next visited my local supermarket, I noticed that it sold ostrich meat.  I had to try it and the butcher told me how to cook it. You cook it as you would a beef steak. Apparently, it’s very healthy as there’s no fat, so very little cholesterol, and for those who have to watch their weight, there are fewer calories than in beef, pork and so on. It’s tasty too!

If you love travelling by train, you’ll love Portugal!

There are buses too naturally, but these are not usually as comfortable as trains. Of course, there are also coaches for travelling distances. These also tend to run to time, so don’t be late to catch the one you pre-booked.