We just moved into our new Paris apartment in my favorite quarter, Montmartre. The apartment comes with two bedrooms and a spectacular view of Paris including the Eiffel Tower. But, just like any major city such as London and New York, finding an apartment in Paris was daunting!

Unless you have befriended a nice group of French people who randomly have an opening in their apartment building, you have to go the same route as many of us foreigners in finding a new home in the City of Love.

It’s not just foreigners who suffer in the apartment hunt in Paris; many French people have the same trouble finding an apartment, because the government protects the tenant more than the owners. Which can be a good thing. But for this reason, owners want much more proof of income and trust for a good tenant, because they have heard too many horror stories of tenants not paying their rent and squatting in buildings for years without the government intervening.

To make matters worse, I am a freelancer without your normal contract or pay slips that prove my income and trustworthiness. I was feeling hopeless in finding a new home, thinking that without these much needed documents, I would never be approved. But fear not! In this article I will walk you through the best ways to find an apartment in Paris.

• The first stop, besides knowing someone who will rent to you personally, is exploring the many apps and websites that offer apartment openings. The top ones in Paris are Le Boncoin, PAP, and SeLoger.

• Rents vary a lot but are nowhere near as bad as New York and London. You can expect to pay about 1,000 euros per month for a studio here and around 2,000 per month for a two-bedroom apartment.

• The areas of Paris, of course, make a huge difference in price too. The closer you get to the center of Paris, the higher the rental rates go up. If being in Paris isn’t as important to you, consider looking at apartments just outside the city which are easily accessible by train or RER. You will get a lot more space for your money outside the city.

Many people look at:

Asnieres sur Seine, eight kilometers from the center of Paris, on the northern edge between Saint-Denis on the east and Colombes on the west.

Saint-Cloud, 9.6 kilometers from the center of Paris, on the northwest side near Versailles.

Saint Germain-en-Laye, an affluent suburb about 20 kilometers from the center of Paris

• When you check out the apps, you notice right away if the apartment is run by an agency or by a private owner. It’s typically easier to be approved by an agency, but they still require some paperwork and a fee. With a personal owner you can avoid the fee. The fee for an agency is about 15 to 30 euros a square meter.

• A private owner and an agency will ask for proof of income such as pay slips, a job contract, or bank statements. If you’re like me and do not have a contract or pay slips, you have two options. You have to show you
make 3 times the rent each month or provide something called a garant.

• A garant is someone who lives in France and will sign a document stating if you cannot pay your rent, they will pay for you. Since you are an expat, such a person can be hard to find! This is where the website Garantme.fr comes into play. On this website, it’s easy to fill out a form and get financial backing for an apartment hunt.

Think of it as insurance for paying your rent. You pay them a percentage of your rent for the year as a premium, and they provide the proper paperwork to rent. Depending on your income and the size of the apartment, you can expect to pay them about 27 percent of your monthly rent for this financial service.

For example, if your apartment is 1,800 euros per month, you will pay around 800 euros per year to Garantme for the proper garant paperwork accepted by most agencies. This is the route we took and found it easy to find an apartment with their help.

• If you only plan on living in Paris part-time or for an extended vacation, it’s better to take the Airbnb route. This is a way to avoid pesky paperwork, and many owners on Airbnb will give you a monthly discount for extended stays.

• If money is no obstacle and you want to live it up in a beautiful spacious apartment, you may also consider Paris Perfect rentals.

There you have it … these are some options to find your dream stay in Paris. Moving here may seem impossible at first, but with the use of these sites you will find yourself sipping a cafe from your private balcony in no time!

Krystal Kenney is a photographer and writer in Paris, France. She also runs a podcast called “La Vie Creative,” where she interviews creatives in Paris. She moved to Paris more than eight years ago from Annapolis, Maryland to start a new life. Krystal loves spending her days exploring Paris, and traveling all over Europe. You can see more of her photography and her podcast on her website here. She specializes in wedding, event, and vacation photos.

You can see more of her work for Dispatches here. 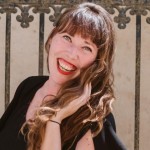