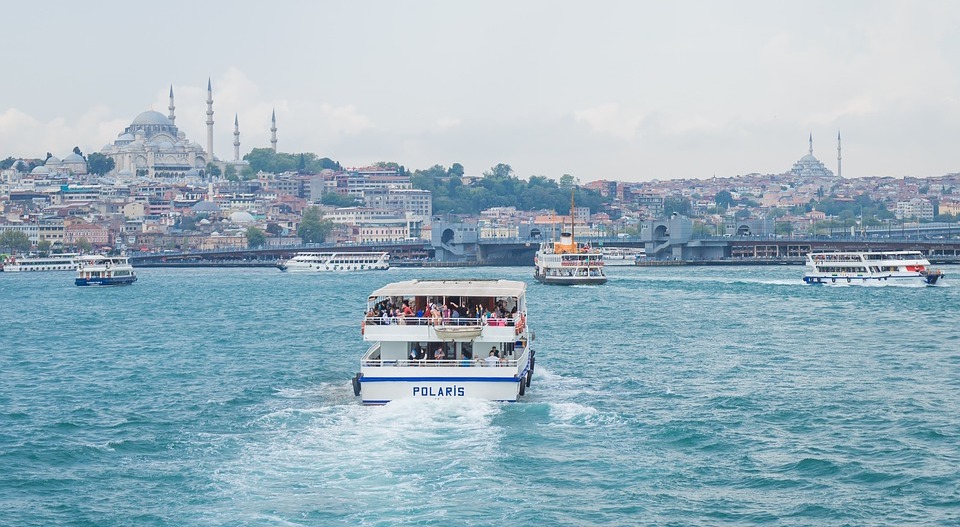 (Editor’s note: While Turkey’s Ministry of Culture and Tourism covered some of the author’s expenses in Istanbul, Dispatches Europe received no remuneration for this post.)

I recently had the chance to visit Istanbul for the first time as a guest of Turkey’s Ministry of Culture and Tourism. Members of the British press and I were invited to tour some of Istanbul’s highlights in advance of the upcoming Super Cup between Liverpool and Chelsea.

In addition to having an amazing venue to host what is sure to be an exciting match between two rival teams from the United Kingdom, Istanbul has plenty of historical landmarks, trendy neighborhoods, and world-class restaurants. If you have tickets to the Super Cup, or you’re planning a trip to Istanbul for another reason, read on for some of the must-see sites in this diverse city at the crossroads of Europe and Asia.

My flight from Germany landed at Istanbul’s newest airport on the outskirts of the city. Its first phase of construction has been completed and all commercial flights into Istanbul have now been transferred to this location. By 2027, when the final phase is complete, the airport is expected to have the capacity to handle more than 200 million passengers annually, making it the busiest airport in the world.

For now, the airport has some kinks to work out. It took several members of our group hours to get through the check-in and security process. Once through, it was difficult to find the rest of the group due to a weak Wi-Fi signal and a lack of signage pointing us in the direction of the food court.

My advice is to allow yourself more time than usual to get from the entrance to your gate on your trip home. If you don’t end up needing it, then you can spend the extra time browsing through nearly 5,000 square meters of duty-free shops, or grab a bite to eat in one of the many cafés and restaurants in the domestic and international terminals.

After being met by our guide, we were picked up by our driver and taken to our hotel, The Marmara Taksim. This modern five-star hotel has a signature chocolate shop on the ground level, an excellent restaurant, a spa and health club, and a gracious staff. If you’re splurging on your visit to Istanbul, their Club Floor rooms offer access to a whole host of other complimentary amenities and services including airport transfers.

The hotel is adjacent to Taksim Square in the Beyoğlu district, an area known for its shopping, dining, and nightlife. The neighborhood is also the city’s central transportation hub, which makes it a great home base from which to explore the other districts.

For dinner that evening, we were treated to an amazing spread of local and regional dishes at Mürver, a restaurant with views to die for. As we dined, boats drifted by on the Bosphorus and the shores were lit with colored lights that made the evening magical.

Even more magical was the opportunity to tour the inside of the Hagia Sophia after the crowds had gone home for the night. Our guide clearly knows people who know people, as we had the place to ourselves with just the security guards and some cats for company.

This historic building served as both Christian church and mosque over the centuries, and is now a museum on the list of UNESCO World Heritage sites. The oldest cat, by the way, is Insta-famous. She poses for pictures in the most perfect places, showcasing the beauty of the church/mosque/museum behind her.

The next morning, we sailed on a yacht down the Bosphorus with Europe on one side of us and Asia on the other. As we slipped through the strait, dolphins surfaced alongside the boat and our guide pointed out the landmarks on either shore.

Before disembarking, we stopped at Maiden’s Tower, a lighthouse-shaped structure on a small island in the middle of the strait that is the subject of legend and an object of Hollywood fame. Used in turn as a customs station, defense tower, garrison, watchtower, lighthouse, quarantine station, movie set, and now café and restaurant, it offers its guests a 360˚ view of the city from its upper level.

Our next stop was Vodafone Park, home to the Beşiktaş JK football team and site of the upcoming UEFA Super Cup. This 42,000-seat stadium will open its doors on August 14th to Liverpool and Chelsea fans for a showdown between the reigning champions of the Europa League and the Champions League.

Visitors who arrive in advance or linger after the game should definitely take a stadium tour and/or check out the Beşiktaş JK museum.

Lunch was at the Sahrap Restaurant down a quiet side street in the Beyoğlu district. Owned by celebrity chef Sahrap Soysal, this boutique restaurant serves traditional Turkish dishes with a modern twist.

Full of good food and good cheer, we embarked on a walking tour of the neighborhood, strolling past the iconic Galata Tower and down streets lined with shops, cafés, bars, and restaurants.

ISTANBUL … WHERE YOU’ll NEVER BE BORED

Next up was a tour of the former Jewish quarter of the city, Balat. One of the oldest districts in Istanbul, its streets are paved with cobblestones and its historic wooden buildings are painted with vibrant colors that make it popular with Instagrammers and professional photographers alike.

After a short break at the hotel where some of us went for a refreshing swim and others fell into a brief, but satisfying food coma, we climbed back into our tour bus for a short ride to the Bomonti District, where an evening of entertainment awaited us at Bomontiada, a former brewery that was turned into an entertainment complex with bars, restaurants, and performance spaces.

If you’re looking to party, look no further than Bomontiada. Though it caters to a younger crowd (looking at you, 20- and 30-somethings), there were plenty of middle-aged moms and dads and their children hanging about during the dinner hour.

Plate after plate of locally sourced, seasonal cuisine was delivered to our table at Kilimanjaro until we begged them not to bring dessert, though I’m sure it would have been equally as delicious as everything else we ate that night. Be sure to try their house cocktails or a glass of Turkish beer before you ask for your bill. You won’t regret it.

In a post-dinner daze, we headed next door to The Populist, a bar for “the people.” The nostalgia was strong in this industrial space, where the DJ played a selection of favorites from the 80s and 90s from his spot inside a repurposed VW van.

As the night wore on, the crowd fed off the energy and when the opening strains of Madonna’s “Like A Prayer” radiated from the sound system, Gen X went wild.

As this was our last night in Istanbul, we were reluctant to head back to our rooms at The Marmara despite the late hour, so we walked through the pedestrian zone near the hotel in search of shisha (hookah lounges).

“Late hour” is a misnomer. Istanbul never sleeps. Even after midnight, stores along the street were still open for business, people sauntered along the pavement enjoying the cooler temperatures, and the smell of street food wafted through the air. The last of our group to return to the hotel after shisha and a few games of backgammon were witness to an impromptu dance party.

On our final day, we had the opportunity to visit the Theodosius Cistern that stored the city’s water supply during Roman times, and Topkapi Palace, the main residence of the sultans during the Ottoman Empire. Now a museum administered by the Ministry of Culture and Tourism, this sprawling complex gives visitors insight into palace life as far back as the 15th century.

Before we even left for the airport to make the return flights on Turkish Airlines, I vowed to return soon to explore the city on my own and visit some of the attractions we missed like the Blue Mosque and the Grand Bazaar. Istanbul is a magnificent city where east meets west, and, in August, Chelsea meets Liverpool.

Win or lose, we hope your experience in Istanbul is as memorable as ours was.

• Confessions of a set-jetter (updated): Beth Hoke goes to Croatia in search of ‘Game of Thrones’

• Beth Hoke in Croatia: New Museum of the Senses is a great year-round destination for kids of all ages