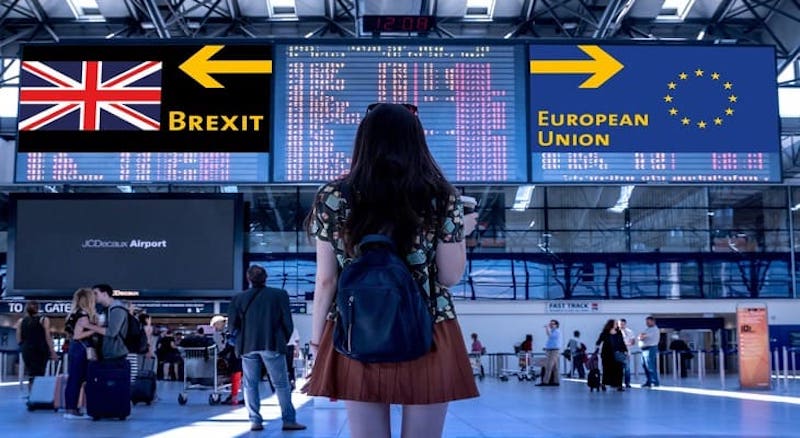 Due to the pandemic and the accompanying travel restrictions, I hadn’t visited the United Kingdom for 18 months until recently. This was my first visit home to post-Brexit Britain. There were some changes, which were expected.

As we travelled from the Netherlands via the Channel Tunnel, the first obvious change was that we had to show our European Union residency cards going through French immigration, and on our return journey, we had our passports stamped, which made me – as a non-voting “Remainer” – so sad.

It highlighted the fact that we are definitely a country outside of the EU. As a non-EU member, what you can bring to the UK and bring back to the EU has also changed. Most of it is self-explanatory – no drugs, weapons, endangered plant species, etc. But sadly, for an expat, you cannot bring into the EU from the UK meat and dairy products.

So, no longed-for treats like good bacon and pork pies, Christmas pudding (as it contains suet, which is an animal product), and apparently chocolate (of all crazy things to ban!). Thankfully, teabags and Marmite are okay, but there may be a problem with a sandwich as it can contain butter, cheese or meat.

I have to say that we had no problems with our Marks & Spencer’s picnic for our journey into the EU, but I guess it depends on the day and the spot checks.

Any dairy products that have been processed so many times they barely resemble anything that came from a cow! The upside is that you can now buy duty-free goods to travel back into the EU, so a plus for drinkers and smokers if you stay within your allocation.

The petrol shortage situation was just beginning whilst we were there. We drive an electric car, so it didn’t affect us, but it is caused by a shortage of truck drivers who deliver the petrol, not a shortage of actual petrol. The same supply problem was also apparent on some grocery store shelves with very obvious gaps in the supply chain.

One can see the timing of Brexit combined, unfortunately, with a pandemic, meant many EU residents returned home because of the lockdowns, and the lack of workforce has had a huge impact on the UK. Christmas may bring its own problems, with a higher number of deliveries needed.

The COVID situation seemed to be under control, and although nearly all the restrictions in England if you are traveling from a “Green” list country have ended, there are some hoops to jump through on arrival.

• If fully vaccinated, you must complete the government locator form and book a PCR test for Day Two. This may change to lateral flow test at the end of October.

• If unvaccinated, you are required to do a pre-departure test and a 10-day quarantine as well as Day Two and Day Eight tests.

• Be financially prepared for the tests … they are not cheap!

The restrictions once in England are minimal – no mandatory mask wearing other than on public transport and social distancing of one metre in inside bars, restaurants, indoor attractions etc. I found it heartening that I was not the only one wearing a mask in stores, as I am in the Netherlands, and people were very good generally at keeping their
distance.

Every pub I went to had covered outdoor seating, which was great both for the weather and Covid!

(Editor’s note: COVID infection rates are rising rapidly in the United Kingdom, with new rules possible. Be sure to check the entry requirements here on the official website.)

The trip home was much needed to see family, and the relief and joy were overwhelming to actually be physically together and not just chatting on Zoom.

Nevertheless, there was a shade of regret on our return as we really felt the gap widening as we left the UK shores, not just because of the English Channel but mostly because of the definite sense of leaving an island where the majority has chosen to be alone.