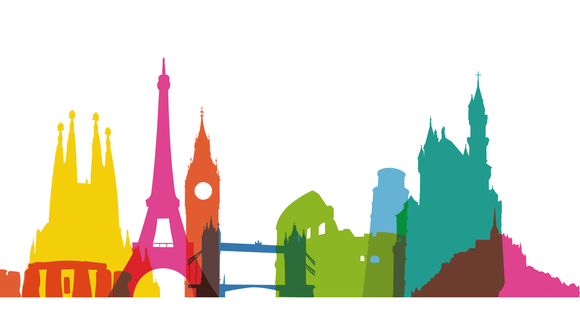 Your search will yield millions of posts, with candidates for Europe’s long sought Silicon Valley ranging from “Silicon Docks” in Dublin to “Silicon Allee” in Berlin. The reality is, it’s still much easier for super talented engineers and entrepreneurs to leave Europe for The Valley and get rich quick than it is to replicate Silicon Valley in Europe.

As Spotify founder Daniel Ek so famously noted, whenever European companies are on the brink of success, they’re sold.

“The US has (310 million) people and has produced Amazon, Facebook, Google, Apple, Microsoft,” he said, adding that it is “insane” that Europe has a population almost twice as large and doesn’t have one of these companies. “Statistically, that’s an anomaly.”

As long as that’s true, Europe will never produce a talent cluster that rivals The Valley.

BUT, if European policymakers are serious – and we believe they are – about opening borders to allow the freeflow of information products and services between EU nations, you’ll start to see talent head to the Old Country … and Europe will emerge as a challenger to the U.S. digital hegemony.

One of the most cogent arguments for Europe achieving its goal comes from former Skype executive Stem Tamkivi – who’s now in The Valley – in TechCrunch:

Why be the 3,481st guy in Facebook, when during a three-year stint in a cool European city you can be No.1 in the entire country in what you do? Yes, moving American hotshots to Europe can be a tough sell, but we did it successfully at Skype, and companies like Soundcloud are doing it again.

In fact, that’s what we’re counting on as we get ready to launch Dispatches. And as I wrote earlier, experience tells us that if Skypes, Adyens, Spotifys, Rocket Internets and SuperCells are popping up all across Europe, sooner or later a dominant innovation center is likely to coalesce somewhere … somewhere at an intersection of talent and capital.

Every country in the world, not just Europe, wants to capture Silicon Valley’s lightning in a bottle.

And why wouldn’t they? In 2013 alone, the 150 largest tech companies in the Bay Area earned more than $100 billion in net income, according to the San Jose Mercury News. Of course, $100 billion is a pretty good slice of the entire $18 trillion United States GDP, all generated in one small, talent-dense area.

Last week, we looked at why Silicon Valley is so successful and Stanford University’s huge contribution to that success. In fact, after reading “Secrets of Silicon Valley” and other books, we’ve concluded that creating Silicon Valley wasn’t all that complicated.

All that needed to happen was:

• Post-World War II tech innovators such as Hewlett-Packard had to lay the foundation.

• Stanford had to be there to contribute talent.

• Revolutionary integrated circuitry companies such as Fairchild Semiconductor and Intel had to follow.

• All those ingredients – along with a risk-capital culture – had to ferment for 40 years or so and voila! The digital age is born, and we have companies such as Apple, Facebook, Google and Netflix clustered all within a few miles of Stanford. Of the 15 largest publicly traded Internet companies in 2015, 11 are U.S.-based and four are in China.

In the second part of our little exercise, we’re going to look at European innovation centers with the ingredients – a top university, a tradition of cutting edge companies , a startup ecosystem complete with risk capital and an entrepreneurial culture – to someday rival Silicon Valley.

But before we launch into our list, let’s talk about comparative advantage, a basic law of economics and trade. It’s why Norway doesn’t export bananas, and North Korea has so few social media successes. It’s also why some European countries simply aren’t going to attract Silicon Valley-level talent and investment for obvious reasons including extreme climate (the Scandinavian countries and the Baltics) and corruption and lack of governmental transparency (the Balkans and Eastern Europe.)

Even Paris will have a difficult time evolving as Europe’s dominant tech center, mostly because of the grande ecole mentality and the fact it’s already branded as the capital of fashion, culture, tourism and taste. One of the elements of strong innovation centers – whether you’re talking about Mountain View or Eindhoven – is there are fewer distractions to take people’s focus off business.

All these places will continue to produce incredible tech and entrepreneurial talent … for other places.

Silicon Allee already has attracted a lot of tech talent from all over the world … to the point freebie weekly tech and startup community newspapers are lying around in pubs and coffee shops everywhere, though mostly in German. A new startup is founded every 20 minutes in Berlin. Rocket Internet and subsidiary e-tailer Zalando already have thousands and thousands of employees there.

Last year, Google opened a 16,000-square-foot incubator known as “Factory Berlin” where mentors from Silicon Valley companies work with startups. Microsoft has its own rival incubator. Berlin startups raised about $2.2 billion from VCs last year compared with $1.5 billion in London.

It has a tech university, Free University of Berlin, and plenty of capital. Berlin, like the original Silicon Valley, is built on a firm foundation of technological innovation. Now, money is flowing to Berlin-based startups from Peter Thiel, Goldman Sachs and other U.S. investors.

The bottom line – it’s a rockin’ town if you’re 25 years old, and hugely affordable compared to London. This is where young talent is going to feel the most at home whether they’re coming from Frankfurt or Frankfort.

Why it will never happen: It’s already happening. Yet, Berlin ranks well behind London and even Amsterdam on the 2015 European Digital City Index at No. 7, largely due to lack of digital infrastructure (read high-speed wireless connections), German bureaucratic rigidity and high labor costs.

Like Stockholm, Amsterdam has a digital track record. It’s starting to look like it could become at least the innovation center for fintech, with the ongoing success of Adyen. And it does have all the Silicon Valley ingredients. Well, most of the ingredients.

But, because the country is so small, we conclude you have to look at the Netherlands holistically. The Netherlands’ decades old technological evolution parallels The Valley, led by electronic giant Philips instead of Hewlett-Packard and GE, and aviation pioneer Fokker instead of Lockheed.

In addition to the University of Amsterdam, The Netherlands has two technical universities – one in Eindhoven, one in Delft. TU/Delft has courses in engineering, computer science, mathematics and applied sciences. TU/Eindhoven is especially intriguing because of the cross pollination with Philips and chip maker ASML. Again, echoes of The Valley and Intel.

One important advantage the Netherlands has is that everyone  – and we mean everyone – speaks English better than Americans, and English is the lingua franca of the digital world. That’s not the case in other cities touted as future Silicon Valleys such as Barcelona or Paris.

Finally, the Dutch society has been global and entrepreneurial since the 16th Century. As in the U.S., the annual list of the Netherlands’ wealthiest has a healthy number of Nouveau Riche along with Old Money. (A tip – don’t fall for their tulip investment startups.) The Netherlands also is a fun place to live, and close to everything – just a few hours from Paris, London and Berlin.

So, maybe Europe’s Silicon Valley will turn out to be an entire country; a cluster of collaborative hubs from Eindhoven to Groningen.

Why it will never happen: The obvious disincentive to entrepreneurs is the punitive personal income tax rate, as well as the 30 percent tax on the sale of a substantial interest in a company versus the 15 percent capital gains rate in the U.S. Oh, and the regulatory hurdles. But that’s true for almost all of Europe.

Stockholm, like a great thoroughbred, has a great track record. A Telegraph post from June calls Stockholm “the second most prolific tech hub in the world on a per capita basis, behind Silicon Valley.” Which is kind of misleading, because Stockholm’s entire population is maybe 800,000 … about the size of Dayton. But, that relatively small city (compared to San Francisco or New York) has produced Skype (though it was founded in Estonia), Spotify and a bunch of digital game makers.

Startup ecosystem: Check … Stockholm is chockablock with incubators and accelerators.

Capital? Check … Atomico is there.

Why it’ll never happen:  Sweden is cold, relatively dull and in the middle of freakin’ nowhere. That makes attracting young talent difficult when you’re competing against California, New York or even Switzerland. It’s why Hollywood is in LA, not Minneapolis.

Yes, Berlin and Amsterdam get a lot of pub, and spend a lot of time praising themselves. But London is, for us, an obvious candidate to (some day) rival San Francisco. Why? Easy … London has universities with talent equal to Stanford either in the city, or a few miles outside including the London School of Economics, Oxford and Cambridge.

The money is also there. The European Digital City Index ranks London No. 1 in part because “not only is London’s venture capital industry the most developed in Europe, but the presence of many financial services firms helps promote a growing number of fintech and crowdfunding startup ….”

So, what does London have to show for all this so far?

Um, Zynga and DeepMind Technologies, which was acquired by Google.

Also, the United Kingdom is not now, and never will be, part of the euro community, as The Next Web founder Boris Veldhuijzen Van Zanten points out in this VentureBeat post.

Because of its booming financial sector, The City and all the wealthy sheikhs, Russian oligarchs and retired warlords buying up property, London is insanely expensive, even compared to San Francisco. Living in a closet and slaving away in coworking space is a real disincentive to young super star coders, developers, programmers and engineers. Unless they’re in Silicon Valley.

Why it’ll never happen: Financial centers supply the capital. But they also tend to soak up the talented people who might otherwise become entrepreneurs. Would you rather go to Wall Street or The City and immediately earn 1 million dollars/pounds-plus selling bonds, or starve for years waiting for your startup to go public? London is doomed to play New York to the Netherlands’ Silicon Valleys.

As we’ve reported before, Switzerland is focused more on high-tech manufacturing, pharma and bio-science and medtech startups. But Switzerland as a whole – and particularly Zurich – has mega-capital, tech innovation and great universities.

In fact, Switzerland is the only country other than the U.S. or the U.K. to place a university in the world’s top 10. ETH Zurich – the Swiss Federal Institute of Technology – is ranked No. 9 in the world; No. 5 in Europe.

Let’s face it … the Swiss are never going to hawk stuff on the Internet, or create social media sensations because, well, they’re above it. BUT, something like the Blue Brain Project could spin off AI startups, consumer behavior companies and a whole New Wave of advanced, emerging technology businesses that make everyone forget about Silicon Valley. It might not be an exact equivalent of Silicon Valley, but rather Silicon Valley 3.0.

Here’s something else to think about … in Switzerland, immigrants are 20 percent of the population, including corporate expats. And they bring a lot of perspiration, inspiration and new, culture-changing ways of looking at problems.

Why it will never happen: Switzerland ain’t California. The Swiss are rigid, secretive and insular by nature (sort of like coders, programmers and engineers), and they already make a ton of money off just looking out for other peoples’ money. Does that sound like a put-it-all-on-red culture that’s going to give birth to a Silicon Valley? With economic engines such as Zurich, Basel and Geneva, do they even need another economic engine?