“I’m really not getting this,” I thought as I ruined yet another ice cream cone. “It’s the move at the end that’s the tricky part for me I think,” I told the owner (and my new employer … let’s call him Helmut) of a very well known ice cream shop in Schôneberg, Berlin. It was my fifth month of being an out of work cocktail bartender during Berlin’s second lockdown. Due to government mandated closures, there was still no bar or restaurant work to be had, but I was determined to make some euros, even if it meant talking my way into jobs I was completely unfit for.

As I dropped another nearly finished – but actually destroyed ice cream cone into the trash – Helmut patiently nodded and I wondered what face he was making under his FFP2 mask. I was standing in front of a row of three waffle irons, trying to master what I now realized was a very tricky task: baking and rolling ice cream cones.

This was my second attempt to break into the Berlin ice cream scene. My first try led only to a nice but sort of awkward interview at another very well known ice cream shop in Kreuzberg. Initially, I felt I had that one in the bag. I had a nice phone chat with the lady doing the hiring, but when I went to the interview, the vibe seemed weird. When I introduced myself to the fellow behind the counter, he seemed immediately upset at my presence. Then, during the actual interview, things became a little intense.

This would be one of many times I would tell prospective German employers that “Oh yes, surely when Berlin’s lockdown ban of bars lifts and establishments start hiring people like crazy I would ABSOLUTELY honor my employment agreement with you and not skip out to do the job that I actually enjoy and have loads of experience in: cocktail making.” This was not true of course, but at the time I believed it to be true. That’s how bad I needed a job.

My interviewer, let’s call her Lotte, told me that if “we invest in you, then we expect you to invest in us.” “Oh certainly, genau,” I replied. Ever since I started learning German, my internal monologue has been augmented with little additional phrases auf Deutsch. It’s like a little part of me is always practicing basic phrases, trying to show off my upper beginner level (A2) of German, to the rest of my brain. “Ice Cream ist wichtig, sehr wichtig” my German learning brain spat out at me. “Absolutely do not say that out loud during this interview,” the rest of my brain replied.

Lotte asked me, “would you be willing to drive a scooter and deliver our product to our other shops as they need it?” “Oh, of course!” I answered, probably too enthusiastically. This was a European part-time job fantasy that was falling into my lap! I saw myself on a Vespa, cruising down Berlin streets in the sun. Lotte asked, “Are you interested in making ice cream?”

“Of course,” I replied, “that sounds amazing!”

Was I yelling? I don’t think so, but the look on her face seemed like maybe I was too into it. But shouldn’t a person who makes ice cream be really into making ice cream? Lotte asked, “If we share our recipe with you, can you keep it a secret?” Wow, I really thought I had this one nailed, I mean they were asking me to protect state secrets. “Oh yes, you can rely on me 100 percent.”

Rejection, then another gig

After a somewhat awkward close to the interview however, something in my gut told me I didn’t have the job nailed, and later that night when I got what was clearly a mass-copied text in German that read “we are going with another candidate” my heart sank. Another rejection! Candidates? I didn’t know Ice Cream shops had candidates! My German brain congratulated itself for not having to use Google Translate on the message.

I was crushed and allowed myself to melt in defeat for the evening. A week later, I was trying to weasel my way into another ice cream gig and was being trained in the deceptively easy looking craft of cooking and rolling fresh ice cream cones.

The daily work flow went like this: show up to work, grab an apron and set up three waffle irons, and spray them with a light coating of oil. Then grab the tools: a tiny little metal spatula, a dough scooper and a stainless steel cone roller, which is what the dough goes into after cooking it so it can then be quickly rolled into shape with a hand crank.

When the irons are hot, scoop a large (but not too large) dollop of dough to a precise spot just above the center of the blazing iron and close it. Cook it for a few seconds, then flip it over (with the tiny spatula) and close it again, cooking it for a few seconds more until it’s brown, but not too brown, then carefully slide the dough, which is like a little waffle pancake now, directly into the cone roller and angle the top right edge of it at about 45 degrees with just under half off the dough hanging off the edge. Immediately start cranking the roller with one hand, while feeding the edge of it through with the other hand. Roll it fast enough so that the dough doesn’t cool and harden before a whole cone is formed, but not so fast as to tear tiny little holes in the cone.

After about two days, I felt proficient in almost every step of the job, except for perhaps the most important part: the final stage of rolling, the closing of the cone. I could cook, flip and roll almost all of the cones just fine, but when I got to the end, I kept screwing it up, tearing a tiny little hole at the bottom that only a serious cone man like Helmut would be able to notice.

This was a crucial step I would have to master before moving on to what the complete job actually entailed: rolling cones with all three waffle irons going, alternating dough dispensing, cooking, flipping and rolling so each cone comes out of each waffle iron on time and in tact. I felt like I was learning, but in truth I was failing to master working with just one waffle iron; I wasn’t even doing one third of the job.

After three days of not making it past phase one, my gut told me it wasn’t looking good for me. I asked Helmut how long it took him to make cones at his level. “Five years,” he replied. “Oh well,” I thought, “maybe they’ll be patient with me ruining their dough all day long.”  It was March, Berlin was still pretty cold and the demand for ice cream was far from being in high gear. “Maybe I’ve got some time to get this job down.”

Sure enough, my gut feeling was correct, and a few days before my next scheduled shift I was sent a long and cordial text message stating something fishy about it not being busy enough to take on new people and needing to give available shifts to the “more experienced ice cream cone bakers.” I was a little sad to get this news, but I was also greatly relieved. Let’s face it, I couldn’t keep up. For me, this wasn’t just a steep learning curve; this was an intense and endless learning cone, spiraling down, down, down into a mediocre little pile of failure-dough.

It seemed that making ice cream cones, much like Algebra, was something that would forever elude me, and maybe that was okay. People go their whole lives without even thinking about Algebra.

I could now never again walk past an ice cream cone without feeling a little twinge of fear and angst. As the weather got warmer, I got a greater sense of just how serious Germans in Berlin are about ice cream. I’d soon get quite used to the sight of gigantic queues of people waiting for cold and squishy treats that they would often enjoy in a kind of silent, entranced reverence that reminded me of junkies in Lower Manhattan.

Getting turned down from yet another job sucked, but I did get paid pretty decently for my time at ConeFail. “Hey, we’re still having fun,” I’d tell myself during this winter of job chasing. Besides, I had a line on two other potential gigs, one in a pastry kitchen in Kreuzberg and the other in a soil mixing plant in Potsdam.

I was a man with options.

Chris Loar is a comedian and artist living in Berlin. He was born in Torrance, California and called Brooklyn, New York home for 16 years before moving to Germany in 2020. A multi-hyphenate creator, Chris is also a passionate Yoga teacher and cocktail bartender. 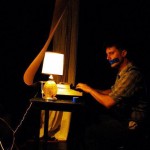