(Editor’s note: This post about who is using Greece’s golden visa program was originally posted on Tranio. It’s reposted here with permission.)

Greece’s residence-for-investment programme is one of the most attractive in Europe. To acquire residency, one only needs to spend 250,000 euros on property purchases, or buy a hotel or tourist furnished apartments in a timeshare contract. The main applicant’s spouse, their parents and children under 21 years of age are also eligible for residence.

According to state investment agency Enterprise Greece, the country granted investors 2,300 golden visas (5,700 visas, including those issued to family members) between 2013 and 2017. Chinese, Russian, Turkish, Iraqi and Lebanese nationals received the most residence permits – about 80% of all the visas issued. 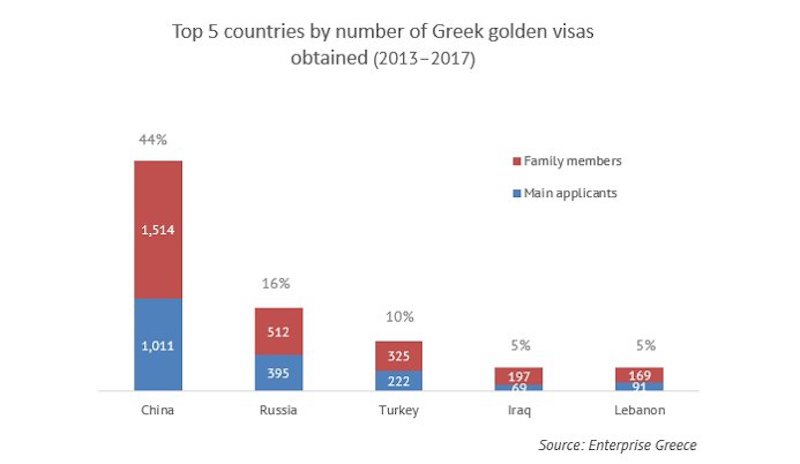 China has been actively expanding its presence in Greece over the past few years. In 2016, Chinese port operator COSCO, one of the largest in the world, acquired 51 percent of the Piraeus Port Authority for 280.5 million euros, and in June 2017, State Grid Corp. purchased a 24-percent stake in state-owned power grid operator ADMIE for 320 million euros. The active expansion of China into Greek infrastructure can be explained by the affordability of Greek assets and the country’s favourable geographical location that makes it is an important trading partner and transportation gateway for the New Silk Road between Europe and the Middle East.

The Chinese also received the most Greek golden visas. According to Enterprise Greece, between 2013 and 2017, golden visas were issued to 1,011 Chinese investors (2,525, including family members).

According to the Chinese Investment in Greece and Big Picture of Sino-Greek Relations reports published by the Institute of International Economics Relations in 2017, Chinese golden visa applicants spend an average of 550,000 euros to 600,000 euros on real estate, which is double the minimum investment required for residency.

According to Tranio, the average budget of Russian-speaking property buyers who want a residence permit in Greece is 250,000 euros. They also often consider Spain, Cyprus and Portugal, which have similar residence-for-investment programmes.

According to Enterprise Greece, in 2017, Greek golden visas were granted to 222 Turkish nationals (547, including family members).

According to Turkish media outlet Hürriyet Daily News, almost none of the Turks holding Greek golden visas actually relocate to the country. Many of them want Greek residency “for future use” in case of instability in their home country. According to German broadcaster Deutsche Welle, traffic to Turkish-language versions of Greek property websites grew almost tenfold after the Turkish referendum on expanding presidential powers on April 16, 2017.

The Turks who buy property in Athens usually rent out the apartments or use them as holiday homes. According to Turkish online media outlet Daily Sabah, the most popular types of real estate among Turkish buyers are prime and resort properties, shops, hotels, land plots and even parking lots. Many investors have properties in high-end Athenian neighbourhoods: Kolonaki, Psychiko, Glyfada, Voula and Vouliagmeni.

According to Greek web portal Ekathermini, Turkish nationals are among the most dynamic groups of Greek property buyers today, along with the citizens of the United Kingdom, Germany, France and Italy. Most of them are university-educated, middle-class or affluent natives of Western Turkey, the Aegean coast and Istanbul.

By late 2017, Iraqi nationals had obtained 266 golden visas under the Greek residency-for-investment programme, from which only 69 were issued to the main applicants. According to Enterprise Greece, Iraqis obtain residence permits for their entire families more often than other applicants. on average, each investor applies for residence with three family members. The number of main applicants from Iraq is lower than Egypt, Lebanon and Ukraine.

According to the 2018 Henley Passport Index, the Iraqi passport is the least attractive in the world, with visa-free entrance to only 30 countries. As such, Greek residency, which allows visa-free access to the Schengen Area, is popular among Iraqi nationals.

Lebanese nationals obtained 91 Greek golden visas (260 including family members) between 2013 and 2017, or about 5 percent of the total number of golden visas issued. Like the Iraqis, Lebanese investors also secure residency for an average of three family members each.

The population of Lebanon is approximately 6 million, of which 1.1 million are Syrian migrants and about 500,000 are Palestinian migrants, and about 1 million Lebanese nationals live abroad (according to some estimates, this figure is between 4 million and 13 million). The main reason why Lebanese nationals want foreign residency is the political and economic instability in their home country.

According to the Bank of Greece, the volume of transactions closed by foreign nationals in the Greek real estate market in 2017 exceeded the 2016 figure by 87 percent. In January 2018, this figure was 205 percent higher than the year before.

The opportunity to travel across the Schengen Area is not the only driver of demand for the Greek golden visa programme. The Greek property market is starting to recover. According to the Bank of Greece, property prices fell by only 1 percent in 2017 from the year before, compared to an annual decline of 6.5 percent for the past eight years.

Yulia Kozhevnikova is a real estate expert and journalist at Tranio, an international overseas property broker.

Tranio is a Moscow-base broker with offices in Bryansk, Spain (Barcelona, Alicante, Torrevieja) and Germany (Freiburg). More than two million people visited their website in 2017 – twice more than in 2016 – the company’s revenue grew by 18 percent in the past year. In 2017, 26 percent of all our transactions involved foreign clients. In particular, we closed several large commercial real estate transactions in Germany to nationals of Pakistan, Turkey and South Africa.