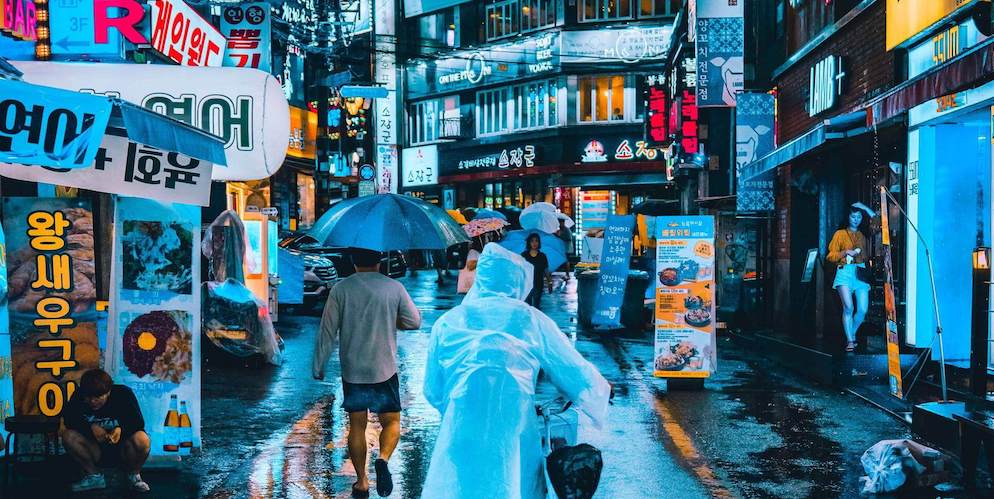 More shocking food facts … The use of sugar is on the next level in South Korea. It’s used even in food items you had no idea could be sweet. For a start, in most of the Korean places, if you order fries, you are very likely to receive them all covered in the powdered sugar, which, to be frank, tastes surprisingly good. When buying pizza, pasta, garlic bread, or any salty baked good, you can be sure it is going to be fully covered in sugar. I’ve even received a pizza that had a generous layer of sugar on it and was served with pickles and MORE sugar syrup next to it.

However, for the same sweet reason, Koreans do struggle with decent teas. If you go to small Korean owned cafes – there might not be any tea at all. While if you go to large chains, you are very likely to get the sweetest tea you’ve tried in your life. It is almost as if you are drinking a cup of hot sugary juice. Not my favourite thing, but I believe people who drink tea with sugar would love that combination.

Moreover, something I found strange in Korea is the fact that tomato is considered a fruit. So a variety of smoothies and even ice-cream are made from tomatoes, which also tastes surprisingly good.

Always use two hands to give or receive anything! With people who you just met or haven’t know for a long time, you have to make sure to use two hands when giving glasses around at the table or helping out with something. Just like bowing, this is used as a sign of respect. When you give or receive something from an older person you have to use two hands. This goes for everything. In the shops you cannot just casually give your cash or card to the cashier – you will have to use both hands.

Since you do not always know who is older and who is in a higher position, it is safe to just make it a habit to use two hands everywhere. This way you will not offend anyone. You are not allowed to leave the table until the elder has finished eating their meal. And if you are a fast eater, you should slow down a bit. It is considered rude to eat quicker than everyone else, especially your elders.

Similarly, if you are on a call with an older person, you should never hang up first. You have to wait for the older person to hang up the call, and if by any chance the call drops and you are younger – you have to be the one to call them back.

If you get invited to a Korean person’s house, do not come empty-handed! Bring something to drink the tea with or some fruit – something, but you should not arrive empty-handed. Even if they tell you to not bring anything, do not come with empty hands.

Eating out in Korea does not work the way we are used to. The food culture is all about sharing a lot of small but diverse dishes, meaning you rarely ever choose a meal for yourself only. It is uncommon to eat alone, so when going to dine with two or more people, you will probably select many different meals and share them all at the table. Besides, you always get a bottle of water with your meal for free; free of charge water is a must-have item for Koreans everywhere you go.

Equal treatment is not assumed nor is it necessarily regarded as desirable in Korea. Everyone has their role in society, and if someone is higher than you in social rank, you show respect for him or her. It is a natural process. While Westerners try so hard to be unique, which in many cases causes them stress and life crisis, Koreans pursue being similar to the group they belong to and try to fit in as well as possible.

The respect in everyday life of Koreans is not only shown through manners but also the ways people treat each other. Korean is the only Asian language that is divided into three different patterns of speech that show respect and politeness. One of the most fundamental characteristics of the Korean language is kyongó, which stands for the honorific language. That changes the whole structure and endings of most of the words. This language pattern signifies one’s strong sensitivity to the age difference, social status, occupation, degree of intimacy, and nature of previous interaction between the speaker and the listener. Each one of those factors plays a major role in the kind of speaking tone chosen and which norms will be socially acceptable.

One of the very first things a Korean will mention when meeting a new person is the age and the position. This is because this will determine what kind of language they will be using towards each other and what kind of manners are acceptable. Even if one is just a couple of months younger than another person – this will mean that panmal or ‘casual’ language cannot be used unless it is agreed. This can often lead to clashes. One of my friends told me that at her work, she was supposed to coach new employees who sometimes happened to be older than her. In these situations, they would have awkward misunderstandings where they had to agree on how to address each other.

When I first came to Korea, I did not understand why when people push you on the streets or step on your new white shoes in the metro. No one ever apologizes! At first, I considered it very rude, and did not understand – how could that be possible in such a respectful culture? For us, this kind of attitude might come off as cold or even rude. However, I learned soon that it has nothing to do with that!

Asians are raised in a way more empathic culture than Westerners. From a very young age, children have to be able to detect emotions or messages that are hidden in simple sentences. Growing up in this environment they learn to use the ability to sense the group feelings without actually having to express the negative messages and emotions. Thus, it is a common habit to avoid conflicts in order to maintain peace and harmony within the group without raising the issue. Similarly, if they step on your foot, it is rather considered rude than polite to talk about the accident.

When coming to South Korea it’s important to remember that local culture is Confucianism-driven. The way Koreans see “happiness” and what it means to be a “person” in this society is way different from the American or European point of view. Many of the daily habits take roots from historical and religious events and have a strong influence even in modern Korean culture.

A big difference between Koreans and Westerners can be seen by the way each of the cultures views the society and social connections within it. Westerners view the society around them in a very individualistic way – the world that they need to fight to achieve something. On the other hand, Koreans are collectivists. They emphasize ethical and social values with regard to mutual respect and cooperation. People in Korea see themselves as a part of something bigger – a group or a network, where everyone has a role they need to fulfill. Being a friend, employee, brother, son, mother, or father is more important than being yourself.

People see the happiness in taking part in these societal roles and relationships while placing an important value onto keeping them balanced and well-functioning. This happiness is not caused by individual achievements like in the Western world but is attained through a contribution to the harmony within one’s network. The success is often sought as a group goal rather than as a personal badge of merit, where individual distinctiveness is not particularly desirable. People express their belonging to a certain group by being as similar to them as possible.

A teacher once explained to me that Koreans play different roles in different groups and can have completely different identities in all of them. To my question “Isn’t that fake?” he explained that unlike Westerners, Koreans see themselves differently depending on the situation, meaning they will adjust according to the circumstances and the norms within a group.

Then he asked me to describe myself. After hearing my reply he said, “You see, it doesn’t matter to you that much who you are describing yourself to, your character will remain the same in most of the situations. If I ask the same from the Korean students, they will probably be lost. They need to know the situation in which I am asking them. Is it as a friend, a teacher, an employer, or any other situation?”

Anna Bubnova currently lives in the Netherlands where she studies international business. She’s in her third year, doing her internship at Fontys Consultancy at High Tech Campus.

Anna is from Estonia and speaks Russian, Estonian and English fluently as well as some Finnish.