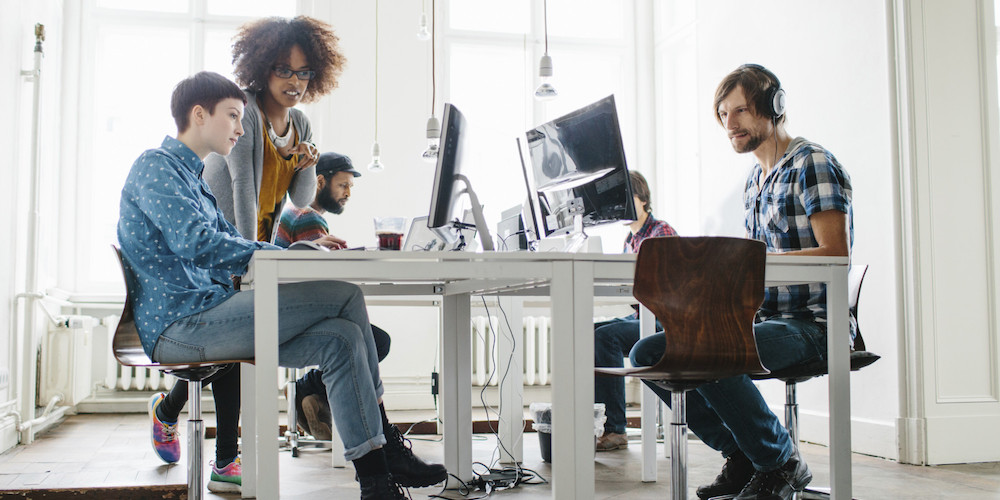 As the Trump madness, the pandemic and hurricanes all converge on the United States, the question we get more than any other is “What’s the easiest route to living in Europe long-term?” In the past, we would have directed you to our Golden Visa archives or our posts about freelance visas. But all of a sudden, some very attractive countries see digital nomads as long-term economic assets and image boosters and are issuing digital nomad visas.

That’s because many are skilled developers, entrepreneurs, social media marketers and influencers pulling down serious jack. But you don’t have to be all about the money. You, like our Beth Hoke, can make a living doing what you love to do, in her case, writing, teaching English and hustling clients while she experiences the best Europe has to offer.

So let’s look at the latest developments. And so you know … some of these visas aren’t actually available yet in Europe. We’ll update this post as they come online.

Portugal, following the philosophy of “go big, or go home,” is the latest entrant in the global mobility of talent game. The Portuguese island of Madeira is planning to open a digital nomad village on 1 February.

The effort is lead by Startup Madeira CEO Carlos Soares Lopez, and you can see the full team here. This is an economic-development project developed by the Regional Government of Madeira, through Startup Madeira, and appears to be for real.

The website is really well-done, but there’s not a lot of info about visa terms, which are crucial if you’re planning to stay more than 90 days, the limit for non-EU citizens in Portugal. In fairness, the website states that this is a limited effort, with the “village” running five months – from 1 February to 30 June. And “the village” appears to be a group of hotels and hostels that are participating.

From everything we can find online, Madeira actually has the infrastructure including shared working spaces and Internet connections robust enough to support digital nomads. As our Beth Hoke can tell you, there are worse places to be a digital nomad than this scenic island in the Atlantic. So why the heck not, right?

Croatia is the latest European country to issue a digital nomad visa. Backed by a commitment by two Split-based Dutch agtech entrepreneurs to invest in this Adriatic jewel, Prime Minister Andrej Plenković introduced legislation last August for a digital nomad visa, an amendment to the Foreigners Act. And voilà, as of late January, an American expat is the first person to get Croatia’s digital nomad visa. Which has to be one of the fastest turnarounds ever.

But we get it: Croatia has all the ingredients – sea, lovely cities, educated workforce and a prime Balkan location between Austria on the north and Greece to the south – to attract wealthy internationals by the droves.

California-born Melissa Paul is a branding consultant, social media manager, and blog editor for design, travel, and lifestyle businesses, according to Total Croatia News. This post has all the details about the process of acquiring the new visa.

The downside is, it’s only good for a year, according to the post about Paul. It cannot be renewed or extended. After one year, the options are applying for a permanent residence permit or remaining as a tourist for 90 days.

On 1 August, Estonia launched its digital nomad visa, with ambitions to attract 2,000 on-the-go people to this far north innovation center on the Baltic Sea.

Estonia has always been a net talent-exporter, with its techies leaving for London or Stockholm to lay the digital foundations for multiple Unicorns including Skype and TransferWise. Now, Estonia wants to steal other countries’ best and brightest.

The one-year visas will be available to digital nomads willing to spend part of their time working from the Baltic state. (We recommend the summer.) The visa will allow people to stay in the country for 12 months, including 90 days of travel across Europe’s 26-country Schengen zone, which in and of itself will make this a hit.

You can now apply at embassies and consulates just like you would for any other visa. But we’re guessing this launches a whole cottage industry of companies that will help you get this visa for a fee.

Who is eligible to apply?

While you can’t apply yet online, you can subscribe to the newsletter here that will alert you when all this goes live.

The fee is 80 euros for a Type C (short stay) visa and 100 euros for the Type D (long stay) visa. Forms can be submitted at the nearest embassy.

Is Georgia (the country, not the state) on your mind? Maybe it should be as this last of the exotic (sort of) European destinations is offering a digital nomad visa. Georgia, like every other country in the world, wants to attract highly skilled internationals who can contribute to the tax base.

This country on the physical and psychological dividing line between Europe and Central Asia/the Middle East is inexpensive and, according to our expats, beautiful and inviting.

This visa isn’t available yet, but when it is, you’ll apply here. Though there is a school of thought that says their 1-year tourist visa is a better option, AND you don’t get taxed. So do your research.

You can see more here on the workfromgeorgia website.

Greece, which already has a plethora of long-stay visa offerings and Golden Visas, is upping the ante with a proposed 50-percent discount on personal income taxes for “digital migrants” – professionals who relocate there to work. This seems to be a trend, with Iceland offering its digital nomad program with the stipulation that recipients must be full-time employees of a foreign company. (See below.)

Greek’s proposed digital nomad program isn’t law yet, but the legislation is expected to move quickly through the Hellenic parliament before the end of 2020. It would cut the current tax rate in Greece – 44 percent for annual personal income of more than 40,000 euros ($47,000), or 17,600 euros – for highly skilled digital nomads, according to the Guardian. Under the proposed scheme, the rate would drop to 22 percent, or 8,800 euros, for seven years.

There is, as you might suspect, a Brexit component as a number of multinational banks are eyeing sending some operations to Greece so they can continue to do business with the European Union. And Greece has been trying to lure back its best and brightest, who emigrated to the United States and other countries during the financial crisis. Finally, there’s that damn pandemic, which has made the office – even the C-Suite – a less and less attractive place to work.

Obscured by pandemics and presidential elections gone awry, Iceland’s government announced in late October that it’s offering a remote worker visa to non-EU citizens with substantial incomes. How substantial? At least 1 million (yes, million) Icelandic króna, or about $7,300 – 6,200 euros – per month, according to the government website. More if you bring your family.

They’re going to need it because Iceland is the second most expensive country in Europe behind Switzerland, according to Numbeo and other sources. Though the upside is, you become an instant millionaire after converting your currency of choice. The new visas allow foreigners to come work remotely for up to six months on this remote island of volcanoes, ice, snow, Björk. stunning scenery and the world’s most northerly capital city in Reykjavik.

Now, the gritty details … the initiative states that you must be the permanent employee of a foreign company. So this is about offering people a very cool place to work remotely at a time global companies are allowing employees the freedom to work anywhere they want. It is not an invitation to come hangout first, then think about maybe getting a few clients for your freelance SEO gig.

BUT, you’re income won’t be taxed and foreign citizens will be allowed to apply for a long-term visa in Iceland for teleworkers and bring their families without having to move their legal domicile to the country or obtain Icelandic ID numbers, according to the website.

We need to shape our export industry, based on ingenuity and by making it easier for foreign nationals to work from Iceland, we add value, knowledge and connections in Iceland that support our innovation environment.

Not in Europe, but we hear it’s nice

Bali – Bali already attracts digital nomads, but now Indonesia is thinking about making it a thing, according to Lonely Planet. You can see the details here, which mostly involve petitions and behind-the-scenes lobbying.

Barbados – Here’s a no-brainer … work from the beach on one of the world’s lovliest islands, a favorite of British celebrities since the 1930s. With its five-star resorts, Barbados was St. Barths before St. Barths became the Caribbean destination in the 2000s.

If Elon Musk were a digital nomad, this is where he’d be digitally nomading – with Amber Heard at Sandy Lane.

Now, Barbados, of all places, is offering a digital nomad visa.

On 1 July, Barbados Prime Minister Mia Amor Mottley announced a 12-month Barbados Welcome Stamp to allow visitors the option to work remotely from Barbados for a year at a time.

“You don’t need to work in Europe, or the US or Latin America if you can come here and work for a couple months at a time; go back and come back,” the prime minister announced.

Now, about that cost of living … cities such as Tallinn and Tbilisi are far less expensive cities than, say, Copenhagen or Amsterdam. The Caribbean not so much. We are huge fans of the Caribbean, but we know from experience that most things are more expensive just because everything has to be shipped in.

That said, Expatica and other crowd-sourced data mills indicate that Bridgetown, the main city on Barbados, has sort of affordable housing, about 40-percent less than Amsterdam.

So there you go … you heard it here first.

Bermuda – Okay, crazy rich digital nomads, there’s a new destination where you can work and count your money in a well-known tax haven.

Bermuda’s Digital Nomad 1-year digital nomad visa went live 1 August and you can apply here. Think of Bermuda as the Switzerland of the semi-tropical Atlantic, close to New York City and with the well-oiled bureaucracy of that Alpine bastion of banking.

This being Bermuda, the application cost is a bit high at $263. And yes, it states clearly in the FAQs that you can indeed bring along your domestic staff.

Thailand – Chiang Mai in Thailand already is a major digital nomad hub. Now, the Kingdom of Thailand is considering changes to its Smart Visa to make it easier to attract digital nomads and remote workers.

It would allow them to stay up to four years without a work visa as long as they work for a foreign company and meet certain qualification metrics.

• the SmartT for highly skilled internationals,

• Smart E for executives at multinationals,

• Smart I for investors,

United Arab Emirates – The UAE just joined Bermuda and Barbados on the list of countries welcoming affluent digital nomads. Officials in this group of posh, futuristic Gulf emirates just introduced in October their one-year “virtual working programme,” which comes with a lot of stipulations including being able to prove you have top-line monthly revenue of at least $5,000.

BUT, the application fee of $287 is a lot more affordable than Barbados, and you don’t pay any taxes in the UAE. So, this is a doable proposition for most. Well, some ….

You can see the details here including an application form. And Dubai is running non-stop web ads trying to lure remote workers.