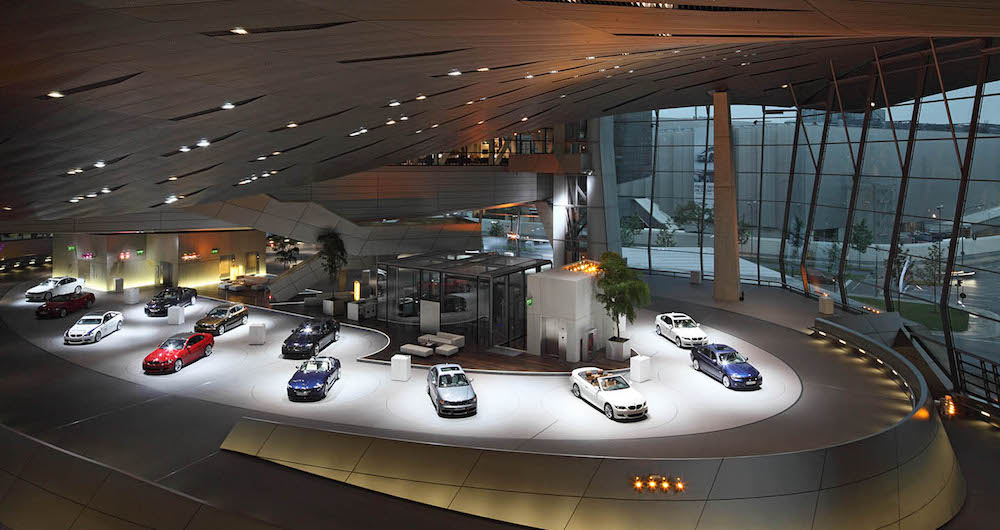 (Editor’s note: Dispatches Europe receives no remuneration from BMW for this travel post about its European Delivery program.)

In 2016, I was eating dinner alone one night in Sienna, 4,000 miles from home when a gentleman on his last night in Italy asked to be seated at the table next to me.

He happened to be from Nashville, a city 150 miles from my hometown, Louisville. We struck up a conversation, and I later joined him at his table at the behest of the osteria hostess who needed to turn my table, and, yada yada yada, we ended up seeing each other back in the States.

ALL PHOTOS AND VIDEO COURTESY OF NANCY WELLENDORF CHURCH

Fast forward two years, and I’m at the end of my nine-month language vacation in Italy when I receive an invitation from my Nashville gentleman to go to Germany to pick up his new BMW at the carmaker’s headquarters, then to travel through Germany and France for a week. This invitation turned into an entrée into a world of luxury travel I had no idea existed.

Matt learned from a friend (who’d done it multiple times!) that he could purchase a car in the States, then pick it up in Europe, enjoy a road trip, then ship it home basically for free.

And for those of us living in Europe, it can be an immersive experience.

There are two classes of people who’ll take advantage of this: Buyers from outside Europe, especially the United States, and those of us living here.

Let’s start with auto connoisseurs in the States. If you’re living stateside, luxury automakers allow you to order a new BMW, Audi, Mercedes or Volvo through your local dealer and save something like 5 percent off MSRP.

Now, the fantastic part … you pick it up in Europe at the factory, where you can experience a VIP white-glove concierge experience if you’re willing to pay a nominal fee. We get to the details about that in a minute.

Anyway, you have your new luxury/performance car, but you’re just getting started.

You’re free to travel for as long as 5 or 6 months (or however long Schengen Rules allow) before dropping off your car at any of 17 different cities in Europe to be shipped (typically for free) back to the U.S.

If you live here, Europe is your playground. You get a special license plate for immediate travel. Then you take your car back to your country of residence and get it legally registered.

Expect the unexpected at BMW Welt

I wasn’t familiar with the extent of the white-glove treatment in what’s called “European Delivery” until Matt, a loyal BMW driver and traveler, invited me, a seasoned traveler, on a trip to Munich to pick up his new BMW. Then, we road-tripped through Germany and France for a week in his new wheels, a perk-laden vacation of a different sort.

Matt ordered his BMW from a dealer in Nashville last September, which meant he could pick it up mid-December at the iconic BMW Welt in Munich. December in Europe is storybook beautiful with the Christmas season ― and specifically the Christmas markets ― in Germany and France.

We arrived in Munich on Saturday, spent the weekend enjoying glühwein and wurst at the Christmas market near our hotel, and another evening at the Tollwood Winter Festival. That was followed by an authentic German dinner at Servus Heidi, and a stop at a traditional Bavarian beer hall, Augustiner Bräustuben, on our way back to the hotel.

We then began the BMW experience first thing Monday morning.

Matt’s BMW European Delivery package included a highly personalized vehicle briefing and handover. This included transport from the hotel in an 800-series BMW to the sleek and commodious BMW Welt.

Upon arrival, we were directed upstairs to the 3,000-square-meter (39,000-square-foot) premier level to check luggage, then welcomed with a seamless 10-minute meeting to sign paperwork (and receive a gift certificate to the BMW shop, and an engraved keychain).

We then enjoyed breakfast in the BMW Welt Premium Lounge, a place we could have returned to for food or drinks at any time throughout the day if we’d chosen. And no surprise – there’s EssZimmer, a 2-star Michelin restaurant on-site where you can dine for an extra fee. Of course there is ….

The real excitement started at 10 a.m. when Rolf, our delivery specialist, greeted us and led us to a sleek three-sided room with wall-sized flat-screen projections on each side for a 30-minute virtual vehicle briefing.

Matt’s exact (virtual) car was pictured on one screen, from which Rolf proceeded to present all of the special features and gadgets such as audio, GPS, convertible top, wireless phone charger, and temperature control.

Rolf then escorted us to the top of a long, open staircase, from which we could see the car, spinning slowly on a turntable in the private handover area the next floor down. The descent down what is called the “Hollywood Staircase” with Rolf seemed almost ceremonious, adding to the overall experience and sense of luxury.

It was in this area Rolf provided an extensive orientation, and from which Matt could have taken a victory lap around the perimeter if he’d chosen to.

A free 2-hour tour of the BMW plant or a visit to the BMW museum is included in the delivery package. We chose instead to walk around the showroom floors to see the offerings of other BMW marques including Mini Coopers, Rolls-Royce, X-series Bimmers, antiques and standard BMWs.

We stopped in the gift shop before hitting the road to explore a bit of Germany and France in his new 440i. The car was waiting for us outside the door, gassed up and with another concierge ready to give us quick directions to the highway.

We toured for a week, first heading just outside Munich to visit Dachau Concentration Camp, a strikingly, disturbingly stark contrast to the luxury we’d just experienced. Looking forward to the autobahn experience, we then headed west. Once we were away from any major city, Matt was able to test the car’s moxie (and my nerves) by driving at 120 mph for a few minutes.

After a stay in Colmar, France, for a few days, we headed back through the Black Forest, took a car ferry across Lake Constanz and on to the Munich airport, one of 12 BMW drop-off locations in Europe for redelivery to the US (additional drop-offs are available in Italy for an extra charge).

Matt had ordered performance tires for his ultimate driving experience in the U.S. Because he was taking delivery and driving in Europe in the winter, BMW arranged for the rental of temporary―but mandatory―all-weather tires, already installed when he took delivery.

Tire rental cost 250 euros for 2 days plus 29 euros each additional day, and includes having all-weather tires put on for delivery and replaced with the performance tires for redelivery.

For an extra 100 euros, all we had to do was drop off the (clean) car at the airport, and the tire service picked up and returned the car for redelivery after we’d departed. It was fairly easy to find the redelivery office at the Munich airport.

There is an entire industry ― or at least several fantastic websites ― set up to accommodate the car-buyer-cum-traveler:

•   A site called Bimmerfest explains in copious detail the advantages and logistics of European Delivery.

•   For expats, The Germany Way details how to buy or lease a car in Germany (useful for anyone else as well).

After researching and deciding on European delivery, all you need is some imagination or passion to find fun or intriguing destinations. BMW has partnered with travel experts Butterfield and Robinson for help hitting the open road.

For the curious aficionado or the avid traveler considering a trip plus European Delivery, here are a few reminders and a handy program chart from FrequentBusinessTraveler.com:

•   Insurance: Car insurance for 14-16 days is included in the delivery package

•   Winter deliveries and tires: You will need all-weather tires if traveling in certain European countries from mid-October to mid-April (double-check countries and dates).

•   Navigation: be sure to check that European maps are loaded, and that U.S. maps will be loaded prior to redelivery.

•   Language: check that the language for navigation or other apps is in your native language before driving off from the manufacturer.