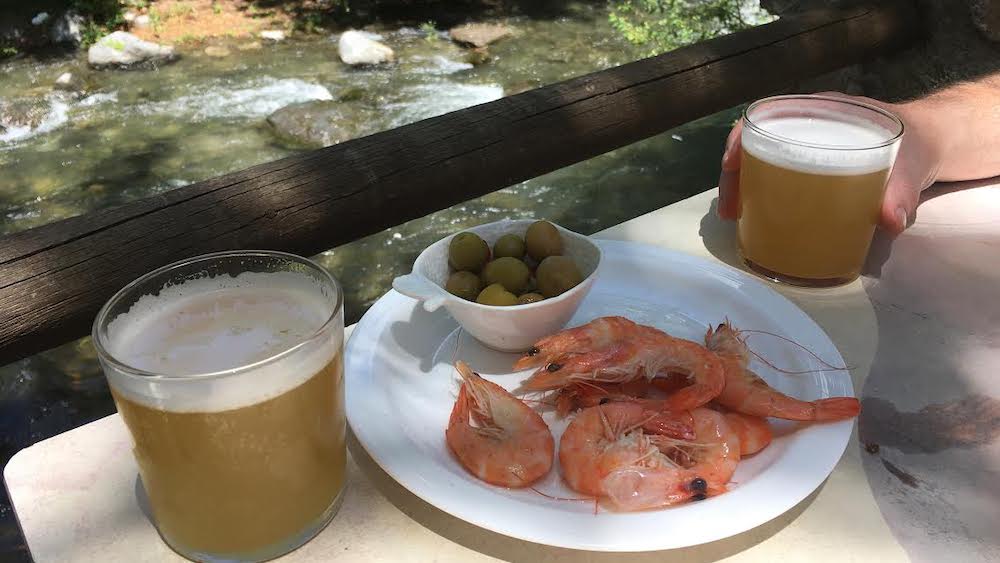 (Editor’s note: This is Pt. 1 of two tapas posts by Irina. You can see Pt. 2 here which includes her recommendations for the best tapas bars in her city of Granada.)

I have to admit that there was more than a tinge of excitement at being able to sit once again after lockdown on the terrace of one of the many local bars here in Granada, Andalucia and enjoy tapas with a refreshing clara con limon (one part beer, one part lemon soda) or maybe even a caña (a small beer.)

Tapa literally means “a cover” or “a lid” in Spanish. However most visitors to Spain will associate the word tapas with those tiny and not so tiny morsels of Mediterranean culinary delights that accompany a drink.

No longer the preserve of Spanish bars, tapas – arguably Spain’s greatest contribution to world cuisine – has reached out right across Europe and beyond. However I’ve yet to see anyone do tapas quite like the Spanish where phrases such as ir de tapas (tapas hopping or literally going for tapas) are part of the national vocabulary.

Ir de tapas as the name suggests involves visiting different bars, with friends, one after the other ordering a drink with tapas, then seeking out a fresh bar offering different tapas. With the Spanish generally eating dinner late in the evening this is a perfect way to snack between meals without ruining your appetite.

The origins of tapas? How long have you got ….

Ask a hundred people in Spain about the origin of tapas and the chances are you’ll get a dozen or more different answers and if truth be known they are all likely to be wrong. But why let that spoil a good story? Legend has it that back in the 13th century, Alfonso X whilst suffering from illness was served small portions of food with his drinks to aid recovery. So successful and complete was his recovery that he decreed all drinks in future be served with a small snack.

Alternatively, we fast forward 600 hundred years or so to Alfonso XIII, who whilst visiting the notoriously windy city of Cadiz was served wine complete with a slice of ham on top to keep the sand out. It is said the king thereafter insisted on being served ham with his wine, thus starting a trend. Yet another theory suggests that tapas originated in Seville, where during the farmers markets plates were placed over drinks to keep out the flies, in time ham, cheese, and other small snacks were added.

The only certainty is that no one truly knows the exact origin of tapas, however being the cynical type I’m more inclined to lean towards the theory that tapas was a way of encouraging customers to drink more in order to satisfy a thirst brought on by these salty snacks.

I consider myself to be very fortunate that I live in Granada, a city famed for amongst other things tapas. I recall the first evening of my first ever visit to the city three years ago. My husband and I had booked a restaurant for 9:30 in the evening with the express intention of setting out from our hotel at about 6 p.m. for a long leisurely stroll taking in some of the sights this amazing city has to offer, stopping off occasionally for a caña or wine along the way.

This was, to steal a quote, a “Big mistake, BIG. Huge!”: every caña we ordered was accompanied by a sizable, tasty, filling and wonderful tapas. Nothing wrong with that per se; however, six cañas accompanied by six tapas immediately prior to sitting down to a full meal in a restaurant… it probably wasn’t my best idea and left me resembling Violet Beauregarde immediately prior to her demise in “Charlie and the Chocolate factory.”

If asked, opt for the small beer, caña (pequaña) as opposed to pinta
(grande) because you’ll get the exactly the same tapas with both small and large beers (you’ll get asked this more in places like Madrid).

A wise Spanish friend once told me (actually he was Irish) to seek out the bars popular with the locals. These are often identified by the copious amounts of paper strewn about the floor of the bar because in Spain, this is the way things are done.

Avoid tourist hotspots – Madrid (Plaza Major), Granada (Bib Rambla and Santa Ana) are more expensive because you are paying for the views and get less tapas. Often the best bars are the ones tucked away down side streets and it’s a great way to explore a city.

Tapas is without doubt an important part of everyday life here in Granada as indeed it is in most parts of Spain. Ir de Tapas is I suppose the Spanish version of a British pub crawl only far more sensible and much less likely to end in a street brawl. Along with the fiestas, siestas, sun, and the relaxed mañana mañana attitude, tapas is part of the Spanish culture that I enjoy the most.

So if you are ever in Granada and need pointing in the right direction feel free to drop me a line I’m always ready and willing to help. See my Facebook consulting page here.