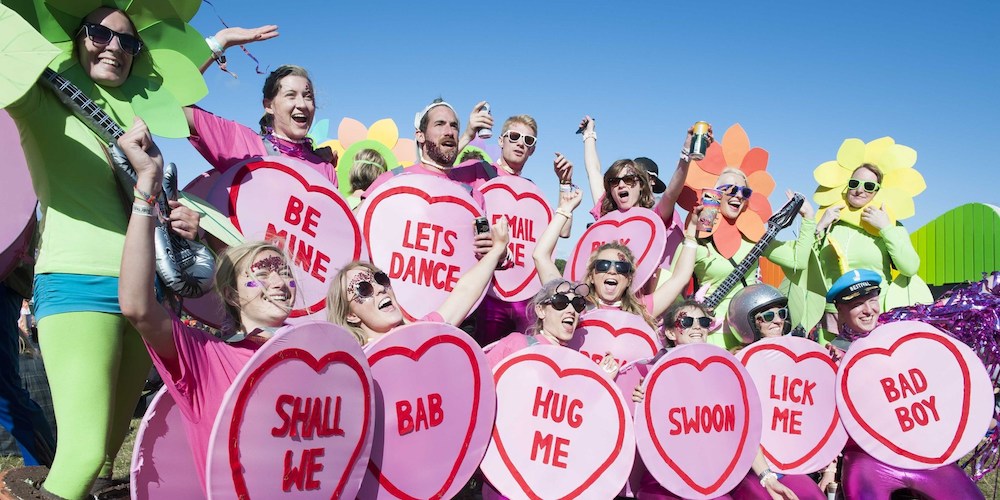 Wondering how to spend your first full weekend of September 2017? You could take a course on Beyoncé at the University of Copenhagen; raise a toast to the Duke and Duchess of Windsor’s upcoming third child; or prepare for war.

You can also check out art and design festivals in Berlin and Paris; enjoy jazz and classical in Brussels and London; and experience street art in Amsterdam and Vienna.

We have it all in this week’s Weekly Weekend Event Guide for Europe, published every Thursday morning.

Amsterdam – Amsterdam Fringe Festival: What better way to send-off summer than with some cutting-edge performance art?

From today through 17 September, the Amsterdam Fringe Festival turns its namesake city into one large stage filled with live art, theatre, music, comedy, dance, and so much more; check the full program here. The festival itself “is an ode to the madness of the stage and to independence of spirit and it is a plea for artistic freedom,” and half of the performances are either in English or “Language No Problem.”

Barcelona – Mecal Air 2017: Feel like catching a movie? Then you need to check out the Mecal Air 2017 open-air cinema festival before the projector falls silent for another year.

Head over to the Picnic Zone at El Poble Espanyol this Friday — the final Friday for this year’s festival — for barbecue and a few short films tied to the night’s theme; the final theme for 2017 is “Horror in the forest,” for those of you who love to scream in terror.

Tickets are €6.50 at El Poble Espanyol’s ticket office, €3.50 if you download the Mecal App onto your iPhone or Galaxy S8 and show it off. 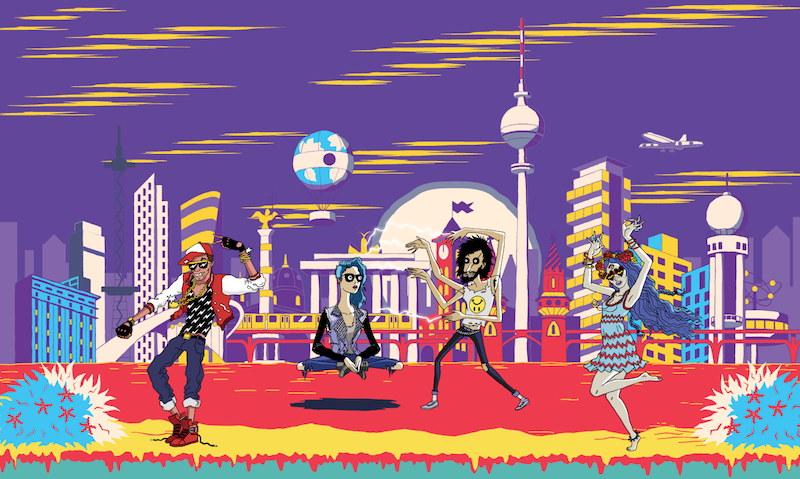 The lineup this year includes Mumford and Sons, Foo Fighters and The XX. But the festival features a million new acts.

Like so many music festivals in Europe, this one is mostly sold out, with VIP tickets left … starting at 250 euros. But, you can still get day passes for 80 euros, according to the website. You can check out what’s available here. And put this on your calendar for 2018.

This is a cashless event, and the website has a ton of useful information about getting to Loolapalooza. There is also a dedicated art market, kids’ zone and lots of local food.

Berlin – Berlin Art Week: This one starts this coming Wednesday, but it’s always nice to be prepared. From 13 through 17 September 2017, check out the many openings, fairs, showings and more during the sixth annual Berlin Art Week.

This year, featured artists include: Monica Monica Bonvicini; Danny Lyon; and Willem de Rooij. There will also be a retrospective on Harun Farocki, and lots of artists covering every genre you know, and a few you don’t; the full program of events can be found here.

All exhibition openings are free admission. Everything else depends on the partner venue; the entire list is here.

Brussels – Marni Jazz Festival: From today through next Saturday, head over to Théâtre Marni in Brussels for the 14th edition of the Marni Jazz Festival. Drummers are the main focus of this year’s festival, and one of every two shows will be a debut performance.

A three-concert pass to the 2017 Marni Jazz Festival will set you back €45, while a single ticket is only €16; ticketing information and booking can all be found here.

Copenhagen – Copencold Hawaii: Rarely do we type the words “Copenhagen” and “Hawaii” in the same sentence (unless we’re talking about a new route from Copenhagen Airport, Kastrup), but this is no ordinary event. Through Sunday, the Danish capital is the host of the 2017 International Surfing Association Stand Up Paddle and Paddleboard World Championship.

Though some might think it silly to host a water sports competition like this in a place like Copenhagen, the setting is perfect for what the ISA needs: nearby Klitmøller is also known as “Cold Hawaii,” as the North Sea’s strong winds and high waves attract surfers of all sorts from around the world to the Danish town.

Here’s the schedule for an exceptionally hardy breed of humans – 300 from 50 countries all competing in front of a crowd of an expected 65,000 spectators.

And the best part? Admission is free for nearly everything but the evening parties; see ticket information in the schedule linked above.

Dorset – Bestival: We’re late in telling you about this. But there appear to be tickets left for Bestival, which moved from the Isle of Wight to Lulworth Estate in Dorset. This year, it runs today through Sunday.

Bestival is best known for its fancy dress themed days (usually the Saturday of the festival). In 2010, it set the record for most people in fancy dress with 55,000 festival goers. And there are lots of activities and events over the four days.

By the way, “fancy dress” doesn’t mean tuxes and ball gowns. It means any crazy outfit or custom you and your friends can dream up.

Oh, yeah … the music. This year, A Tribe Called Quest, The XX and The Petshop Boys are headliners. Tickets are 206 pounds for the weekend of the 4-day event which starts today.

Get your tix here.

London – BBC Proms: This is it! The big blowout for the 2017 season of the long-running BBC Proms hath finally arrived!

If you haven’t been, the summer-long music festival has nothing to do with the proms of your high-school youth, but with the idea of holding classical music concerts — called promenade concerts — against the informal setting of London’s many pleasure gardens.

The Proms concludes this weekend with Proms 72 through 75. Thursday, the Vienna Philharmonic makes the first of two appearances this season with a performance of Mahler’s Symphony No 6 in A minor, followed by Bach specialist Sir András Schiff performing the composer’s 1722 work, The Well-Tempered Clavier – Book 1.

On Friday, the Vienna Philharmonic returns for its second and final Proms appearance this season for a triple-shot of classical genius: Brahms’ Variations on the St Anthony Chorale, Mozart’s Piano Concerto No 14 in E flat major, K449, and Beethoven’s Symphony No 7 in A major.

Last, but certainly not least of all…

London – Final Night of the Proms 2017 and Proms in the Park: This night is so special, it needs its own entry, for on this Saturday, Royal Albert Hall will bring down the house with Prom 75, Last Night of the Proms.

The prom begins with the world premiere of the BBC-commissioned piece Flounce by Lotta Wennäkoski. This is followed by celebrations of the life and work of Zoltán Kodály and Malcolm Sargent — the latter the longtime chief conductor of the Proms — eventually leading to the grand traditions Last Night offers, from Fantasia on British Sea-Songs and Rule, Britannia!, to Pomp and Circumstance March No 1 in D major, Land of Hope and Glory, and The National Anthem.

Want to go? There will be a limited number of tickets available on the night of Last Night for £6 (€6.50), and you don’t need to camp out overnight to get in.

Should you find yourself unable to attend the final Prom of 2017 at Royal Albert Hall, no worries: Proms in the Park brings the experience to the whole of Britannia! London’s Hyde Park features a headlining set by Sir Ray Davies, while Singleton Park in Swansea, Wales will bring beloved TV and film themes to life via the BBC National Orchestra and Chorus of Wales.

From Friday through next Saturday, spend eight days looking at the latest and greatest in Parisian and international design. From food and fashion, to interior and audio, whatever you crave will likely be on display during PDW. Parties, after-work gatherings, talks, and shopping round out the total package.

The festivities kicked off Wednesday night at Pula’s Roman Ampitheatre with Dizzee Rascal, DJ Shadow, and The Outlook Orchestra. From now through Sunday, through, it’s a few days and nights of partying with the likes of: Ghostface Killah; Goldie; Bugzy Malone; Lady Chann; Princess Nokia; and hundreds more; the full 318-artist lineup is here.

Want to party on the beach and the boats? Then you better jump on this, as there are few tickets available; prices range from €50 to €188.50.

Vienna – Buskers Festival Wien: You’ve likely happened upon a busker at one time or another, playing music on guitars and plastic buckets or juggling bowling pins and swords, all for a moment of your time, and a euro or two from your pocket.

Come this Friday through Saturday, all over the buskers will be in one place during the sixth annual Buskers Festival Wien at the Karlsplaz. Lots of street performances and art, plus pop-up markets, all bring color and life to the streets of Vienna for a weekend.

Admission is free, but be sure to have a few euros handy for the performers who are making their living entertaining you.

Early September is one of those times: the Goodwood Revival. For one weekend at Goodwood Circuit (this Friday through Sunday), feel the spirit of vintage motorsport through a massive assortment of historical monsters from 1948 through 1966 — the original period of competition at Goodwood Circuit — battling each other over the 2.38-mile, seven-corner circuit.