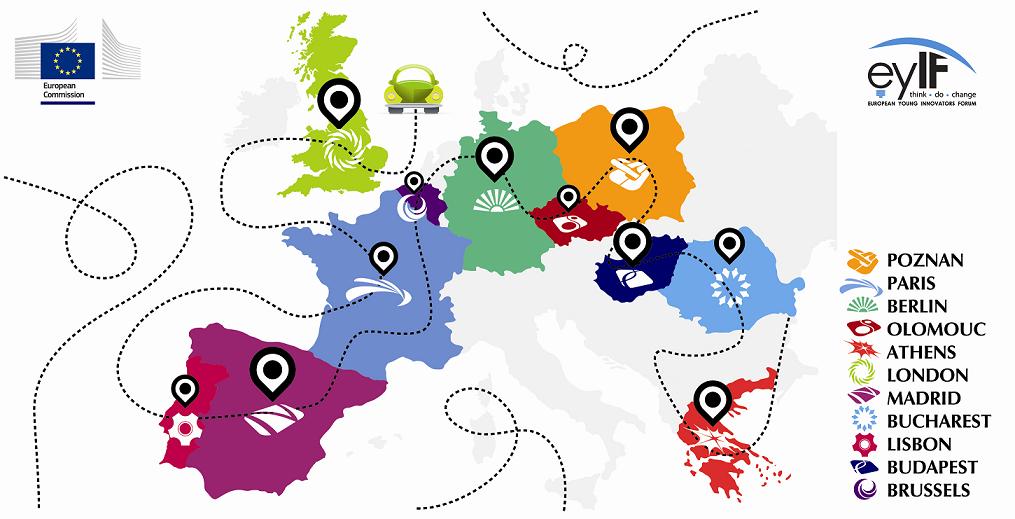 (Editor’s note: This running list of Europe’s best tech and startup events will be updated throughout 2017.)

Dispatches Europe is all about global mobility of talent, and we believe in the value of all the collaborations that can come out of the collisions of creative people at tech/startup events.

So last spring, we decided it was high time for Dispatches’ 2017 list of best startup and tech events across Europe.

Of course, we waaaay under-estimated the number of events … and how many times we’d have to update this post. Or how many total views it would get!

And of course we’re already cycling into 2018 events.

The question we hear increasingly is, “Are these things worth the time and money?” The answer is, “Sometimes.” We were part of HighTechXL’s Impact Summit earlier this summer, and it was amazing because we saw a level of sophistication missing in a lot of innovation centers, even in the U.S.

Also, send us the details on your event to terry@dispatcheseurope.com and we’ll get it posted ASAP.

Data Natives is aimed at data scientist, engineers and analysts. But of course, all our lives are becoming more data-driven.

The conference is divided up by days, with Day 1, 15 November, the workshop day. Day 2 is “The Business of Tech,” with

Tickets start at 150 euros for students and go to 650 euros full access.

During one week each November, thousands of events and competitions in 160 countries are meant to inspire millions to become entrepreneurs while connecting them to potential collaborators, mentors and even investors. Powered by the Kauffman Foundation, the initiative is supported by dozens of world leaders and a network of more than 15,000 partner organizations.

This is the 10th year, and about 35,000 events and competitions will take place during #GEW2017 – connecting nearly 10 million participants to potential collaborators, mentors and even investors, according to the GEW website. But you have to go country-by-country to get a list of events.

Also, there seem to be a lot of GEW events that aren’t really directly connected with GEW Week. The week is sponsored by the Global Entrepreneurial Network, and this is where it gets a little complicated. GEN operates a number of startup efforts including Present Your Startup, a series of competitions  for entry into a Dutch accelerator program.

Expect a crowd, with 17,000 visitors expected and 600 exhibitors. Why? Because there will only be two kinds of cities in the future – Smart Cities, and loser cities.

This is billed as a congress, not a groovy 3-ring tech event with big names. This is more a policy wonk event, with smart people collaborating to make cities better. The silo topics are governance, mobility, safe cities, economy, sustainability, circular economy, society and data technology,

There are 400 speakers, but these are policy wonks and urbanists.

And no, Kevin Spacey won’t be there.

Tickets start at 100 euros, and you can get them here.

IOT and Smart Cities have been building momentum lately. Maybe it’s time you checked out the coming revolution.

And where better than Barcelona (rather than, say, Moscow) to have a winter event?

The 4YFN Smart City Village will house up to 30 Spanish and international startups with solutions designed to create smarter and cleaner futures for European cities.

More than 17,000 visitors are expected this year for the third event including high level representatives from more than 650 cities worldwide, according to the website.

Startups have a branded exhibition booth to show off their goods as well as an opportunity to pitch on stage to a large crowd of attendees, investors and corporations.

4YFN ( 4 Years From Now) is the startup piece of the mega-event Mobile World Capital Barcelona that connects startups and investors.

You know, we keep saying Estonia is on a break-out trajectory. Well, here’s more proof.

Tallinn claims to have “the biggest robotics festival in Europe.”  A collaboration with Tallinn University of Technology and University of Tartu, Robotex 2017 is expecting more than 15,000 attendees.

This is partly a robot showdown, with kids showing off their stuff.

But there’s  a conference with 40-plus workshops, and topics include:

• Talents and STEAM – the future of work
• Innovations in Space Tech – no longer just science fiction
• Ethics in Technology – will AI take over the world?
• Future of Robotics and AI – let’s talk about Deep Tech

Finally, there’s a technology exhibition with the newest technological solutions in the fields of robotics, manufacturing and IT.

Robotex is  more of an economic-development showcase for Estonia, and it appears the robot competition for kids is free, though you have to register.

For the conferences and tech exhibition, tickets range from 49 euros for single-day entry to 300 euros for VIP tickets that includes dinner with key note speakers. (There are 12 announced speakers so far.)

Yeah, it’s freezing cold in Helsinki in the winter (hence the name “Slush”). But last year, more than 2,300 startups, 1,100 venture capitalists, and 600 journalists from over 120 countries came to Slush to drive business, and to experience the phenomenal atmosphere.

This year, 17,500 people are expected in Helsinki, which only has like 2,000 residents to start with. (We’re kidding … you know, right Helsinki?)

The point of Slush is to demonstrate that Europe is bumping up against The Valley as the dominant tech center. Which means Al Gore will be there. (Why, we have no idea.)

You know with that kind of star power, this ain’t gonna’ be cheap.

Tickets start at 395 euros for startups and you can get them here.

This is part of Slush, and is a side-event for sports and fitness tech.

The most interesting part of Smash is the demo area where you can see and be seen.

In the demo area growth companies openly exchange ideas and showcase their products and services. Registered startups are also free to make the most of the virtual display wall. The demo area also has stands for partners and growth companies – enquiries about this here.

Hub.berlin is an event that claims to bring together “the digital avant-garde.” But compared to the mega-events, this is a smallish gathering, especially considering it’s Berlin. That could be because it’s crazy expensive, going up to 1,300 euros.

Last year – it’s fifth – about 2,000 people attended to hear 130 speakers on topics such intelligent mobility, bio-informatics in medicine, and – most relevant to 2017 – the impact of robots and artificial intelligence on labor.

This year, AI, blockchain, fintech and Industy 4.0 are on the hub.berlin agenda, along with politics.

Tickets start at 862.75 euros, but there are discounts available.

This Berlin event is part of the global Disrupt series sponsored by the tech news website TechCruch.

Startup Battlefield brings the world’s top early stage startups together on one stage to compete for the Disrupt Cup, a $50,000 prize, and the attention of media and investors. Participation is free and open.

Most of the speakers at Disrupt Berlin are startup veterans or from smallish investment firms with the exception of Suranga Chandratillake from Balderton Capital in London.

This is one of the more expensive events, with early bird tickets starting at a whopping 700 euros and you can get yours here.

But if you look at the alums and how much they’ve raised, you get it. For instance, corporate  internal networking technology Yammer was started by David Sachs, and raised $142 million before being sold to Microsoft for $1.2 billion.

Since appearing on the TechCrunch stage, Battlefield alumni have collectively raised more than $6.6 billion.

This one kind of confused us. In the old Westerns, you could always tell the Bad Guys because they wore black hats. But the Black Hat event is for the good guys … for the people working to stop malware, DNS attacks and security breaches.

And this is a seriously technical event, so Kevin Spacey and Al Gore are nowhere to be found.

From the website (and this is one of the few bits we actually understood):

Black Hat provides attendees with the very latest in research, development, and trends in Information Security. Here the brightest professionals and researchers in the industry will come together for a total of four days–two days of deeply technical hands-on Trainings, followed by two days of the latest research and vulnerability disclosures in the Briefings.

Seminars include topics such as “Advanced Infrastructure Hacking” and “Advanced OSINT Techniques.”

As we said, this one is for the computer engineers and math whizzes who develop the tools to stop the penetration of corporate, financial and governmental computer networks.

Access to seminars starts at 1,400 pounds, and you can get tickets here.

Students and academics are eligible for half-price tickets.

Coming up in December

This event is sponsored by KLM/Air France. But we haven’t seen any definitive info on it even at this late date. Which makes us wonder if it will happen.

TechChill, 8 & 9 February, Riga, Lativa: TechChill brings together startup teams, entrepreneurs, challengers and curious minds from the Baltics and beyond. They already have 10 speakers announced including investors from Microsoft Ventures and InReach Ventures.

Latitude 59, May 24 – 25, 2018 in Tallinn, Estonia: Latitude 59 is the flagship startup/tech event of the world’s first digital society. In its 10th year, Latitude59 has developed into an event where innovators and startup entrepreneurs can meet investors and potential partners. The boutique event attracts around 1,500 participants spanning from Finland to Ukraine, and investors from across the globe. More a serious event, less a party.