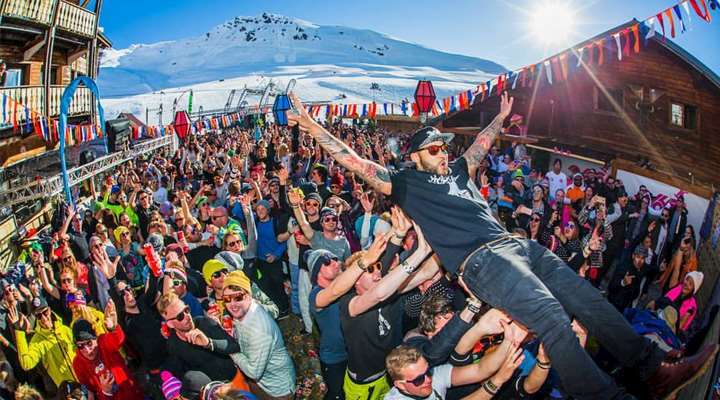 It’s was a long, hot summer across Europe … but, alas, it’s finally over and it’s feeling more like winter. Did we hear a sigh? No reason to be down because we’re thinking about where the party schedule will take us this season.

As usual, we have a couple of ideas … come on, people, we’re expats in Europe! The opportunities are endless.

Our Spring Break and Summer Party Destinations post was one of our best-read ever. It’s our personal challenge to top that with our secret sauce – finding the events across Europe that include a lot of different experiences, all in one memorable trip.

The really big music/ski festivals don’t get going until next March, with Snowboxx, etc.

Until then, we have some helpful hints.

• Some of the big alpine events such as Rave on Snow and Tomorrowland Winter sell out early. Ditto for mega-parties such as Transmission in Prague. If you wait till the last minute to get tickets/passes, you’ll end up on a waiting list. A LONG waiting list.

• Many of the events including Oktoberfest are in cities or resorts where hotels and accommodations can dent your budget. But there are usually alternatives, and we’ll include whatever organizers and travel sites suggest.

If you have a suggestion or want us to list your event, email Dispatches at:

Now, on with the show.

Munich – Tollwood Winter Festival: For 11 years, the biannual Tollwood Festival has been bringing concerts, performances and exhibitions to the center of Munich, one of Europe’s most exciting cities.

The music and arts festival occurs in the summer and winter, the latter occurring from 23 November through 31 December, with a winter market open through 23 December.

There’s not much info about the winter festival at the moment, though the big draw for 2018 is Circus Oz. The Australian company will bring to light “the myths of modern Australia with their new show ‘Model Citizens’… which explores what it really means to be a model citizen in today’s ‘model kit’ society.”

Ischgl, Austria – Ischgl Ski Opening: This is one of the most popular ski destinations in Europe. So naturally, they’re bringing in a major American R&B star to get the party started for the 2018/2019 season.

Jason Derulo is in concert 24 November at the Top of the Mountain Opening Concert.

And this is really a decent deal … you get a Platinum-selling artist and a day of skiing for 65 euros.

Of course, there’s lots to do after the concert as this is one of the premium winter outdoor activities destinations in Europe. So an excellent start to that winter break you so richly deserve after a productive fall.

Verbier – Polaris Festival: The year may be drawing to a close, but the music doesn’t stop because of it. Grab your skis and your lift tickets, and head up to Le Mouton Noir ski resort in Verbier, Switzerland for the 2018 edition of the Polaris Festival, set for 29 November through 2 December.

Polaris gives new meaning to “joining the mile-high club,” as its location in the Swiss Alps is a mile above sea level, with plenty of room to experience the wubs and dropped beats. A magnificent backdrop with plenty of skiing to be had in the day, followed by “a tightly curated dance lineup that goes from house legends to in-the-moment techno icons” at night.

No lineup for 2018 has been announced yet, though passes are available from 190 Swiss francs (166 euros).

Saalbach-Hinterglemm, Austria – BERGFESTival 2018: Snow, scenery and a whole bunch of German (and one American) bands inspired by the Strokes and Nirvana.

This festival in the mountains south of Salzburg is going on its seventh year after starting – most of these festivals do – as a party that got out of hand.

On the bill for 2018 are Beatsteaks, Granada and Seiler & Speer. You can see the whole list here.

BERGFESTival runs from 7 December thru 9 December. Tickets start at 85 euros and you can get festival/hotel packages.

Unlike most of these things, parents who use to party hard show up at BERGFESTival with their kids. So you don’t have to be 19 to attend, though it helps. Because, well, it’s only rock’n roll and we like it!

Saalbach, Austria –  Rave on Snow: The winter season of mega-ski/music events begins for real and runs through April.

From 13 thru 16 December, this is a great way to start winter. Not only is Rave on Snow one of Europe’s biggest music/ski events, 2018 is the 25th anniversary of one of the biggest music/ski events, with 13 music stages. There are more than 80 mostly German acts/DJs listed including UMEK (who has 3 million FB followers!) and Claptone. And it all started with 50 friends who brought along a DJ when they went skiing! Or at least that’s the backstory on the website, which has a lot of photos and vid looking back.

We wouldn’t wait to get tickets, which start at about 30 euros for day tickets.

You can get them here., or at least get on the waiting list.

Savoie, France – Les Arcs Film Festival: It’s like a race these days to figure out how many activities event organizers can add to music and skiing.

At Les Arcs Film Festival, it’s the other way ’round. This is a juried movie-industry event with 120 films that’s added concerts, DJ sets, outdoor adventure and lots of other stuff. And of course, there’s skiing at Les Arcs, one of the largest resorts in the world.

If you’re looking for a crazy party, you’re going to be disappointed at Les Arcs. But if you’re an industry play-uh, a Francophile/French speaker and you love the movies industry, this is for you. That said, this is truly an international event, with Ruben Östlund from Sweden as the president of the jury, and Poland’s film industry will be in the spotlight.

There’s an industry village for those trying to get financing and distribution for their films. There’s the Work in Progress event for films that have been shot but looking for sales agents and distribution channels and lots of other ways to meet other movie industry insiders.

And when you’ve done your deals and networked till you can’t talk anymore, it’s time to ski and party.

Tickets for individual events start at about 7 euros. You can get pre-sale information here.

Les Deux Alps, France –  Rise: If Rave on Snow is the beginning, Rise will take the party to a higher level. 15 thru 22 December, with some British EDM stars.

For 2019, they include Annie Mac and Camelphat (“Cola”) on the main stage. Ah, but there’s so much more.

This is one of the largest ski/music/wellbeing events of the year on Europe’s largest skiable glacier, or what’s left of it after Global Warming. Rise brings together people who party with people who work out and people who follow Goop. An odd combination, but it works. This fits our list definition of a destination with multiple experiences including alpine adventure.

Ski/music packages start at 179 pounds and you can get yours here.

Edinburgh, Scotland – Hogmanay 19: The best New Year’s Eve Party ever? Well, the longest, at any rate starting 30 December and running three full days to 1 January. What exactly is “Hogmanay”? It’s the Scottish word for the last day of the year. Translated into urban slang, it means, “Yo, par-TAY!” Now, the Scottish idea of a party is a bit different and includes burning Viking ships, parading ’round with torches and stepping across your friend’s threshold and giving him/her a bottle of Single-Malt. What’s not to like?

About 20 years ago, the Edinburgh tourism and econ-dev types figured out, “Aye, laddie, this is a goooold mine,” and voilà! You have a blow-out street party/music festival that draws people from around the world.

This year Franz Ferdinand is the headliner at the Concerts in the Gardens event. But we count at least 12 more big events including several for families.

You can get package deals for accommodations through the festival.

Also, London-based Stoke Travel has a Hogmanay travel package for 190 pounds per person and includes:

• a direct, private party train from London Kings Cross to Edinburgh and back, with no one else on the train except Stoke’s 574-person group.

• 4 music stages to dance the night away.

• a private venue for an after-Hogmanay street party.

You can get those tickets here.

• ESNS (Eurosonic Noorderslag) 16 thru 19 January in Groningen, Netherlands – No skiing, but lots of new music in one of the Netherlands’ most interesting college towns. ESNS showcases the best emerging acts from different European countries. Two thousand nineteen will be the first-ever dual-country focus – the Czech Republic and Slovakia.

• Snow Bike Festival, 24 thru 27 January in Gstaad – This is a staged race through the Swiss Alps with the storied resort of Gstaad as the base. Yes, the pros will be there, taking it all seriously. But there will also be a lot of amateurs taking the partying seriously.

• City Ski Championships, 31 January thru  3 February – This is a lot more about business and networking than skiing. The Momentum Festival/City Ski Championships are sort of a corporate outing take to extremes, with marketing & advertising types, bankers and semi-professional ski bums making up the majority of attendees. The event is sponsored by Financial Times. (Momentum Ski is the organizer of this event, which includes skiing, amateur racing and lots of amenities.) This is the 20th year, and the event moves to Italy from overpriced Switzerland.

• Groove CairnGorm, 23 & 24 February in Cairngorms National Park, Scotland – Maybe we’ve binge-watched too much “Outlander,” but this looks pretty cool (literally). Snow, DJs and live music in middle-of-nowhere Scotland at Groove CairnGorm south of Inverness. This is the only snow/music festival in the United Kingdom. And it’s a festival with a cause, benefiting a local charity that provides respite care. This is the winter version of a larger summer festival.

• Tomorrowland Winter, 9 thru 16 March – Tomorrowland organizers are adding a winter event, renting out the entire ski resort of Alpe d’Huez, France, for the expected 30,000 attendees. (Check out the vid.) This is already sold out, but you can get on the waiting list here.

• Caprices Festival – This is one of the last big festivals of the winter ski/music season. And it’s in Switzerland 11 thru 14 April. You can’t even buy tickets yet, but you can submit your email for the newsletter with details about when ticket sales start, and who’ll be in the lineup.